By Newsroom on March 3, 2014Comments Off on TGI Fridays Raises A Glass To The World’s Greatest Bartender 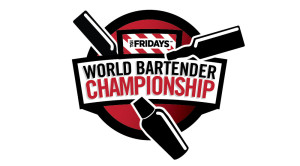 To make it to the final showdown, 12 finalists had to prove they were the best of the best on the local, regional and divisional level by ousting over 8,000 bartenders from over 900 TGI Fridays restaurants in more than 60 countries around the world. In the final competition, each bartender exhibited product, ingredient and recipe expertise through a series of rigorous tests followed by a freestyle performance, where a panel of judges assessed each finalist’s ability to make innovative drinks while displaying both an engaging style of service and flawless mixology techniques, qualities made famous by Fridays.

“It is such an honor to be chosen as the World’s Greatest Bartender by Fridays—a brand with such a legacy of great bars and bartenders,” said Hool.  “I’m incredibly proud of this honor and thrilled to represent Fridays as the World Bartender Champion. I can’t wait to celebrate with my Fridays family and guests in Canton.”

Hool wasn’t the only one to take home honors. Jessica Myers of Vestal, N.Y. was named the TGI Fridays Fan Favorite Bartender. Over 100,000 Fridays fans cast their vote through the World Bartender Championship website. Jessica’s energetic personality and master cocktail crafting skills won new fans over and kept her dedicated fan base cheering for her throughout the competition.

“Our bartenders are a huge reason why Fridays is the best corner bar in town and they replicate that same Friday feeling at more than 900 of our bars across the world,” said Matt Durbin, former World Bartender Champion and vice president of beverage and bar innovation at TGI Fridays.  “It’s the amazing energy, skill and service style that our bartenders bring to Fridays everyday that makes us one of a kind and keeps our guests coming back for more.”

The 12 finalists in this year’s World Bartender Championship hail from five countries. The top competitors who reached the finals include:

The journey and efforts of the 12 finalists culminated in last night’s event, and Fridays will donate all proceeds raised from the local, regional and division bartender competitions to Feeding America, the nation’s leading domestic hunger-relief charity. Fridays is dedicated to hunger-relief and is committed to educating the public about food insecurity.

TGI Fridays Raises A Glass To The World’s Greatest Bartender added by Newsroom on March 3, 2014
View all posts by Newsroom →