By Newsroom on July 9, 2018Comments Off on The Athenian Launches New Tooting Market Site 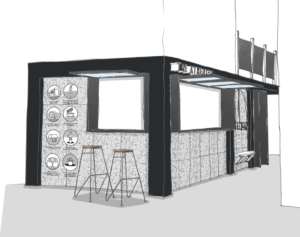 Since 2014, The Athenian has been changing perceptions of contemporary Greek cuisine in the UK with its authentic street food and delicious souvlaki. This summer, The Athenian will be launching a new site in Tooting Market, offering South Londoners a chance to become acquainted with some of Greece’s most loved street food dishes as well as refreshing Hellenic craft beers, wines and speciality soft drinks.

On Thursday 19th July, to celebrate the Tooting launch, The Athenian will be offering their signature souvlaki for FREE throughout the whole day.

Continuing its tradition for naming each site after a vibrant Athens neighbourhood, the new Tooting site will be called, Petroupoli and its distinctive design will be inspired by a typical Greek urban market stall. The addition of The Athenian to Tooting Market is part of an extensive rejuvenation plan that is helping make this area one of the next big foodie destinations of South London. Located in a prime position in the colourful and multicultural market hall, The Athenian will be the perfect place for a pita stop, to grab a quick lunch or to enjoy a light snack with a cold refreshing beer.

The simple, fresh menu at The Athenian consists of authentic and regional Greek street food dishes such as mouth-watering Souvlaki and Gyros, as well as well modern twists on specialities such as feta and courgette fritters. The Athenian’s signature Souvlaki is the perfect combination of soft, handmade pita wrapped around lightly chargrilled meat or cheese which has been marinated in olive oil, lemon and Greek herbs, all served with an array of salads and sauces.

Examples from the menu include:

In the UK, Greek Food historically has been associated with little more than grilled meats and moussaka, but The Athenian has been challenging these misconceptions by adding a subtle finesse to celebrated dishes. A new menu launching later this summer will draw on Greece’s healthy eating traditions and abundant fresh produce from its stunning natural landscape to create authentic vegan and vegetarian street food specialities. By showcasing the richness and diversity of Greek produce in its menu, The Athenian continues to refresh the evolving street food scene in London and Bristol.

Throughout the summer The Athenian will also be hosting a series of exciting events at its White City venue. In July, The Athenian will showcase the flourishing Greek micro brewing industry, giving Londoners a chance to sample up and coming craft beer brands alongside old favourites. For those with a sweeter tooth, The Athenian will also be hosting a Loukoumades festival, a special weekend dedicated to the light, fluffy, Greek doughnuts which are drenched in honey or luscious chocolate sauce. These free events are a celebration of all things Greek and are the perfect place for families, friends and groups of all ages.