By Newsroom on March 19, 2013Comments Off on The Return of Chicken Cock Whiskey 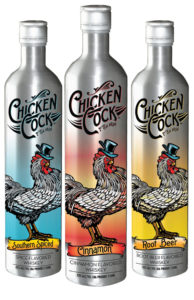 Chicken Cock Distilling announced that, after nearly a century hiatus, Chicken Cock Whiskey is back and more flavorful than ever. Inspired by a 157 year-old legacy, Chicken Cock is making a triumphant return to the market with a new look and fresh flavors.

Originally established in 1856 in Paris, Kentucky, Chicken Cock quickly became a significant 19th century Bourbon brand. Forced to move production to Canada during Prohibition, Chicken Cock was smuggled across the border in tin cans, where it rose to fame as a popular pour at some of the era’s most famous speakeasies, including the eminent Cotton Club in Harlem.

When patrons ordered a “Chicken Cock,” waiters would present the tin can tableside and ceremoniously open it to reveal the bottle of Chicken Cock Whiskey inside.

With an aluminum package and bold, new flavors, Chicken Cock Whiskey is back to once again bend the rules in the 21st Century.

Each is a flavorful blend of all natural ingredients and 86 Proof American Whiskey. A salute to the legendary tin cans, the bottles are made of 100% aluminum to facilitate and retain the optimal temperature for sipping chilled shots or mixing signature cocktails.

Whether in a Southern Spiked Tea (Southern Spiced & Sweet Tea), a Root Beer Julep, or a Chicken’s Inferno (Cinnamon & Ginger Beer ), Chicken Cock is adding a new dimension of flavor and quality to Southern classics.

“When I discovered Chicken Cock in 2010 I knew it was a brand that needed to be brought back,” says Matti Anttila ,Chicken Cock Distilling founder.

“To be able to do so at a time when American whiskey is making such a resurgence and the interest in heritage brands is so high is a truly special opportunity.”

A unique blend of American ingenuity, history and perseverance, Chicken Cock is bridging the gap between generations of whiskey drinkers. It is available this month in Alabama, Florida, Georgia, North Carolina, South Carolina, and Tennessee.

The Return of Chicken Cock Whiskey added by Newsroom on March 19, 2013
View all posts by Newsroom →