This ‘Walking Dead’ Tribute Beer Is Made With Real Brains

By Newsroom on March 24, 2014Comments Off on This ‘Walking Dead’ Tribute Beer Is Made With Real Brains 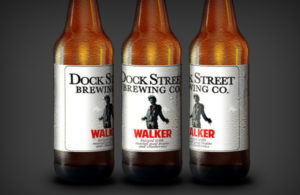 For fans of The Walking Dead, Philadelphia-based Dock Street Brewery has crafted a unique beer that will satiate your inner zombie.

Aptly named ‘Dock Street Walker’, it was made to celebrate the season finale of the hit AMC series. It also pays homage to the show with its special ingredient—smoked brains. No, not actual human brains, but goat brains.

Describing its creation, the brewery said, “Dock Street Walker (7.2% ABV) is an American Pale Stout, brewed with substantial amounts of malted wheat, oats, and flaked barley for a smooth, creamy mouthfeel. Fuggle hops provide delicate, earthy notes, while the cranberries create a sinister, bloody hue, and a slight tartness. The pre-sparge-brain-addition provides the beer with intriguing, subtle smoke notes. In true walker fashion, don’t be surprised if its head doesn’t hang around forever.”

This ingenious brew will make its debut next Sunday on 30 March to coincide with the season finale of The Walking Dead. If you happen to be in the West Philly area next Sunday, be sure to drop by Dock Street Brewing Co. to sample this brainy brew.

This ‘Walking Dead’ Tribute Beer Is Made With Real Brains added by Newsroom on March 24, 2014
View all posts by Newsroom →