By Newsroom on October 1, 2012Comments Off on Turner Duckworth’s designs for Coca Cola – Summer Olympics 2012

Released during the Summer Olympic Games, these special edition packs celebrate Coca-Cola’s partnership with Team USA. Turner Duckworth used horizontal stripes to express the movement, energy and context of various popular sports, and at the same time evoke that most American of symbols, Old Glory. The designs were then carried across
multiple pack formats and point of sale, and Wieden + Kennedy picked
up on the idea with a series of billboards and animations for digital and television
advertising. Celebrating US athletes in London! 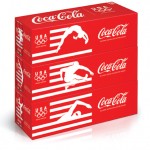