By Newsroom on October 22, 2014Comments Off on Two New Three-Star Restaurants Awarded In The Michelin Guide San Francisco 2015 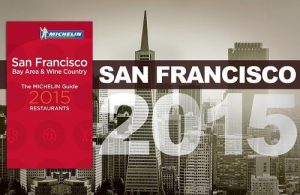 In this new edition two restaurants are making the leap from two to three stars: Benu, where chef Corey Lee uses incredibly precise culinary technique in his cooking. Corey applies a combination of classic French technique along with American, various Asian and noticeable Korean flavors to produce truly unique culinary creations. At Saison, under Chef Joshua Skenes, the kitchen offers seafood of stunning quality with a clear respect for Japanese cuisine, combined with a mastery of the northern California culinary philosophy.

Napa Valley’s perennial three-star restaurants—The French Laundry and The Restaurant at Meadowood—maintained their rank in the 2015 edition of the Michelin Guide.

Worldwide, there are just over 100 three-star restaurants.

“With two new three star restaurants recognized, this 2015 edition reflects Northern California’s remarkable gastronomic energy. The San Francisco Bay area is among the most exciting culinary scenes in the worlds. Californian chefs are mixing their exacting cooking techniques with superb local ingredients and culinary influences from all parts of the globe. The result is a rich, dynamic and unique dining scene,” said Michael Ellis, international director of the Michelin Guides.

In the two-star category, the restaurant Acquerello is promoted from one to two stars. Chef Suzette Gresham is well known for her refined and elegant dishes and delivering superb Italian cuisine that has a unique contemporary touch. Chef Gresham becomes the third female chef in the U.S. gaining two stars in the Michelin Guide.

Newcomers in the one-star category are two very high-quality San Francisco sushi establishments: Kusakabe and Maruya. After years at Sushi Ran in Sausalito, Chef Kusakabe brings his skills and artistic approach at his namesake restaurant in San Francisco. At Maruya, the traditional Edomae sushi is exquisite and best showcased in the omakase menu at the counter.

A total of 474 restaurants are listed in the guide this year. There are 46 different cuisines represented.