By Newsroom on June 8, 2016Comments Off on UberEats Plays Dirty to Nab Prized Food Delivery Cyclists 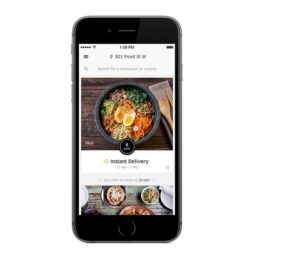 Uber has resorted to underhand tactics to bolster its nascent UberEats food delivery business, by ordering food from rival app Take Eat Easy in a bid to lure its cyclists across to the Uber fold.

Several Take Eat Easy cyclists approached Business Insider to report that they had dropped off food at Uber’s Aldgate HQ only to be leafleted with UberEats fliers when handing over the grub.

In the words of one Take Eat Easy rider in Shoreditch the tactic has already paid dividends with at least one courier absconding, he stated: “They gave him shit loads of fliers. He passes them round. They [Uber] get loads of couriers coming.”

An Uber spokesman refused to deny the claims but implied that it may have been an unofficial ruse rather than sanctioned recruitment technique, saying: “We’ve had a stack of information cards on reception for a week or so and if people work late — like in many offices — they sometimes get food delivered. I imagine someone passed one of the cards to them.”

Uber is offering couriers a rate of £3 per delivery and £1.60 per mile travelled, although it takes a 20 per cent cut from the final fee. Take Eat Easy meanwhile pays riders by the hour although there is nothing to stop people working for both.

Market leader Deliveroo pays its riders £7 per hour plus a £1 delivery commission although it is also looking at adopting a pay per delivery model.