By Newsroom on November 12, 2013Comments Off on USA Medal Favorites Show How Success is ‘Built With Chocolate Milk’

As excitement builds for the world’s biggest winter sports event in February, there are two stories about athletes that already stand out.  The first is a tale of fearlessness and perseverance.  The second is one of determination and redemption.

Both are stories that show how drive and ambition are built with the power of the human spirit. Now, a new national marketing campaign recognizes these athletes and shows how their preparations for the world stage have been ‘Built With Chocolate Milk’.

Ski jumping has always been one of the most thrilling extreme sports, but women have never been allowed to participate alongside their male counterparts at the highest level, despite having a long and rich history in the sport.  The got chocolate milk? campaign is proud of the perseverance by Women’s Ski Jumping USA athletes who pushed for their rightful place in history on sport’s biggest stage in Russia, 2014. 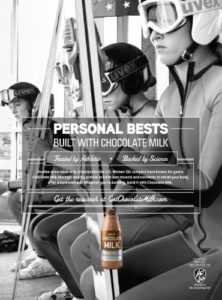 In 2010, Zach Parise scored USA’s tying goal late in the final hockey game against Canada to send it to overtime.  Although Team USA went home as runners up, Parise has since dreamed of winning gold and will get a second chance in Russia.

The got chocolate milk? campaign salutes these incredible athletes and will feature them in the new Built With Chocolate Milk campaign, which debuts in early November.  Backed by Women’s Ski Jumping USA and USA Hockey, the new campaign showcases what elite athletes have known for years – and what research supports: drinking lowfat chocolate milk after strenuous exercise helps athletes refuel and rebuild their bodies so they’re ready to give it their all in their next workout or competition. For any athlete competing in Russia next year, recovering effectively between each intense training session can mean the difference between standing on the podium and going home empty-handed. 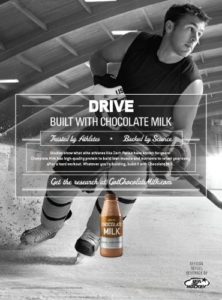 In addition, a webisode series at www.gotchocolatemilk.com shares an exclusive look at how Parise and members of the Women’s Ski Jumping USA team are building up to represent their country on the biggest stage in sports.

“Our nation’s brightest medal hopefuls are following what many elite athletes have been doing for years – refueling with chocolate milk,” said Miranda Abney, Marketing Director at the Milk Processor Education Program, the group behind the new campaign. “Now, we want to show athletes from all sports that their personal athletic goals can be built with hard work, dedication and a recovery routine that includes chocolate milk, which is scientifically shown to help you refuel and recover after a strenuous workout.”

USA Medal Favorites Show How Success is ‘Built With Chocolate Milk’ added by Newsroom on November 12, 2013
View all posts by Newsroom →