By Newsroom on February 26, 2013Comments Off on Yorkshire Bakery Is A ‘Force’ To Be Reckoned With 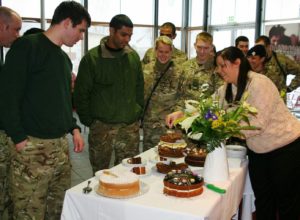 Battenburg, bakes, sponges and slices from Yorkshire’s ProperMaid bakery have earned their stripes this week as they’ve been chosen as one of the Navy, Army and Air Force Institutes’ (NAAFI) “best of British” foods to feed the forces.

Serving soldiers will be offered a much-missed sweet slice of home thanks to ProperMaid , in Huddersfield, when more than 12 of its delicious, ‘traditional cakes with a twist’ begin winging their way to troops across the world this month.

It was ProperMaid’s “original flavours” that caught the eye and palate of the NAAFI taste testers, and its selection – which includes ProperMaid’s Dandelion & Burdock Cake (inspired by Huddersfield’s most famous export) and Sticky Ginger & Fudge Cake based on the traditional Yorkshire Parkin – will certainly give squaddies a taste of ‘God’s Own County’.

NAAFI, the official trading organisation of HM Forces, provides retail and leisure services to the military with restaurants, bars and shops that offer a real British experience.

ProperMaid’s cakes, which will grace the menu at NAAFI’s coffee shops, will initially be distributed in Germany and then to other overseas locations starting with the Falklands.

Nick Spencer, head of food and beverage at NAAFI, said, “We’re all about providing a taste of home and access to products that servicemen and women would not necessarily be able to purchase. ProperMaid’s original flavours, handmade products and the good story behind them really interested us.”

ProperMaid managing director Allison Whitmarsh said she was delighted with the deal.

“We’re over the moon that our cakes have been chosen as a taste of home for the troops,” said Allison.

“It’s wonderful to think that ‘our boys’ – and girls – working hard in other countries will be able to tuck into a good ol’ British brew and a bake!”

Yorkshire Bakery Is A ‘Force’ To Be Reckoned With added by Newsroom on February 26, 2013
View all posts by Newsroom →