By Newsroom on October 31, 2016Comments Off on A Celebration of Marmalade at the Heart of The Palace of Westminster 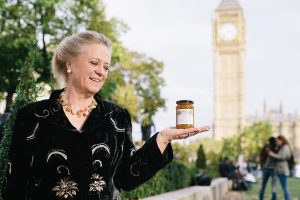 The Palace of Westminster played host to a joyful event on 27th October as for the first time in its thousand year history MPs, artisan producers, sponsors and businesses all gathered to celebrate the growth of one of Britain’s most loved events – the World’s Original Marmalade Awards & Festival.

The Hon Alexander Downer, Australian High Commissioner, opened the evening speaking about the launch of a brand new Australian Festival of Marmalade, organised by the South Australian National Trust, and held under the banner of the Dalemain World Marmalade Awards in Adelaide in November. Rory Stewart, Minister of State for International Development, then spoke about the World’s Original Marmalade Awards in its birthplace in Cumbria.

Now in its 12th year, the Awards are renowned for setting the standard for quality marmalade not only in Britain but internationally, with entries from as far afield as South Korea, Canada, Singapore, Australia and Japan.

The evening celebrated with marmalade cocktails, canapés and popcorn. Jane Hasell-McCosh, founder of the awards, is passionate about the importance of food production to the economy. The magic of the awards lies in their ability to encourage home cooks to make marmalade, setting them on the path to becoming small artisan producers and providing the support needed for these artisans to become larger producers. This is embodied by sponsors Mackays, who themselves export to over 50 countries, unveiling their ‘Award For Excellence’, which will be awarded to the artisan producer who best demonstrates the quality, entrepreneurial spirit and innovation that define the winners of the Marmalade Awards.

The reception welcomed new sponsors Tate & Lyle and Eviivo, who are introducing exciting new categories in 2017. With the competitions now open, the World’s Original Marmalade Awards look forward to receiving record numbers of delicious marmalade, raising the standard of marmalade making all over the world, and over £200,000 to date for hospice work globally.

A Celebration of Marmalade at the Heart of The Palace of Westminster added by Newsroom on October 31, 2016
View all posts by Newsroom →