A Collection Of Cakes Shaped Like Burgers And Other Savory Foods

By Newsroom on September 20, 2013Comments Off on A Collection Of Cakes Shaped Like Burgers And Other Savory Foods 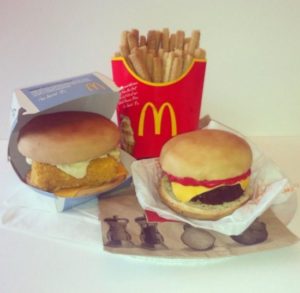 After Louise Caola’s friends enjoyed one of her creative cakes—which looked like sausage and potato mash—the 23-year-old resident of London started creating more confections that look like savory meals.

After posting these tasty confections on Instagram and Twitter, Caola was flooded with orders and decided to quit her job in advertising to make these unusual cakes full-time.

Called Poppy&Lulu, after her childhood friends, Caola’s novelty cake business involves making and hand-delivering these cakes all around London.

Caola creates her cakes using trial and error, with some taking four-hours to make—the Nando’s-themed cakes which look like chicken, burger, fries and sweetcorn were particularly tedious, as it involved her rolling every piece of corn one by one.

Despite these difficulties, the amateur baker makes an effort to complete her work, even if it takes “a few failed attempts.”

The baker aims to take her business nationwide, hoping that there is a market for these strange but wonderful confections.

A Collection Of Cakes Shaped Like Burgers And Other Savory Foods added by Newsroom on September 20, 2013
View all posts by Newsroom →