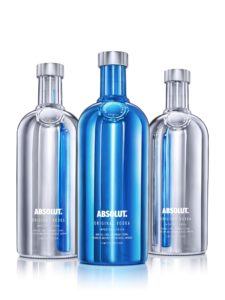 The Absolut Electrik bottle is the latest continuation of Absolut Nights, an ongoing campaign dedicated to reimagining the future of nightlife. In simple, sleek metallic, the bottles serve as a muse for raising the energy of nights out and in – starting with next month’s Absolut Electrik House.

The Electrik House will transform the typical house party into a once-in-a-lifetime experience by pushing the boundaries of traditional “house rules.” Building on Absolut’s commitment to transforming the ordinary into the extraordinary, the Absolut Electrik House and Electrik bottle will reinvigorate nightlife conventions.

“At Absolut, nightlife is in our DNA,” said Joao Rozario, VP, Absolut Vodka, Pernod Ricard USA.  “For us, nights are unique opportunities to celebrate creativity and self-expression, and we continue to seek ways to reimagine and re-energize what a typical night out, or in, can be.  Our Electrik Bottle is the latest expression of our ‘Nights’ campaign and we hope it inspires unexpected, transformative nights for our consumers.”

Absolut Electrik made its debut September 20 on E!’s Countdown to the Red Carpet and Live from the Red Carpet, when the show hosts celebrated the Emmy Awards’ nominees with an “Electrik-fied” toast using the Absolut Signature E! Cocktail – Absolut Best Dressed.