By Newsroom on April 8, 2014Comments Off on Artisan Cheese Fair Now The Largest Collection of Cheese Makers in UK 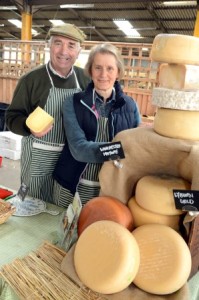 The Artisan Cheese Fair – which began in the Market Town of Melton Mowbray four years ago – is now the largest gathering of traditional cheese makers in the country.  More than 200 regional specialities from over 25 counties across the British Isles and as far reaching as Fife in Scotland, County Carlow in the Republic of Ireland, Cornwall and Cardiganshire – will offer cheese-lovers a feast of flavours.

The Artisan Cheese Fair takes place in the Cattle Market of the town famous for its Stilton and Pork Pies – Melton Mowbray on 3-4 May 2014 with an entry price of only £1.

The event, which was the brainchild of local food historian Dr Matthew O’Callaghan is designed to support the UK’s burgeoning artisan cheese industry – which can now boast a range of heritage and traditional cheeses which rivals France. 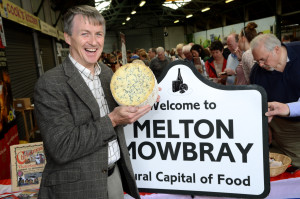 “Great cheese has always been a part of our culture in this country and should be celebrated.  By gathering as many artisan cheese-makers as possible in Melton Mowbray for our Fair, I am hoping that visitors will find other varieties and regional flavours they haven’t yet tasted and come away with new favourites.

“For the cheese-makers, it is all about distribution of their products around the UK and encouraging sales so that we can all enjoy the fruits of their labour intensive work and passion and hopefully ensure their survival,” he adds. 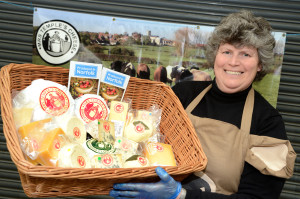 The 2013 Cheese Fair saw the launch of a local Nottinghamshire/Leicestershire heritage soft cheese Colwick, which had been out of production in the area for over  20 years.  Belvoir Ridge Creamery recently featured on Jamie Oliver’s Channel 4 Friday night series Food Fight – restarted production with help from Cheese Fair organiser Matthew O’Callaghan in April 2013 and now supplies local businesses, restaurants and farm shops all over the Midlands. 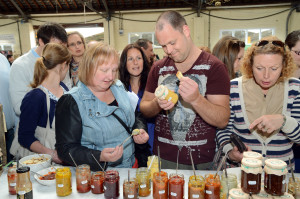 From firm favourites like the region’s famous Stilton, to West Country cheddars and English produced soft cheeses, artisan cheese makers will showcase their specialist and heritage cheeses to thousands of visitors over the weekend event.

The Artisan Cheese Fair will also showcase other complimentary local food producers including ciders, ales, chutneys, and pies, as well as offering interesting talks and tasting opportunities hosted by prominent figures in the cheese-making industry.  Pairing cheeses with wines; cooking with cheese; and the history of Stilton are just some of the extra events on offer.

Artisan Cheese Fair Now The Largest Collection of Cheese Makers in UK added by Newsroom on April 8, 2014
View all posts by Newsroom →