By Newsroom on August 1, 2018Comments Off on Bedale AFC Make Headlines with the ‘Wurst Kit’ Ever Sponsored by Heck 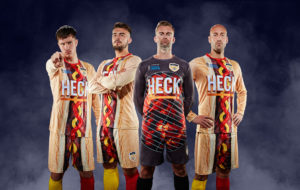 Bedale AFC have made headlines again with their ‘wurst kit’ ever. Midday on Friday 27th, the sausage-based kit was launched to buy online at historicfootballshirts.co.uk, with 25% of kit sales going to Prostate Cancer UK.

The kit, sponsored by Heck Food, was unveiled at The Heck Stadium Tuesday 24th of July, live on BBC Look North. It features a hot dog in a bun with a double helix of ketchup and mustard, custom sausage numbers on the back, and a new motto of ‘You’ll Never Pork Alone.’

The kit, which was devised by creative agency Hearts & Minds, aims to raise awareness and money for Prostate Cancer UK.

Chairman Martyn Coombs said: “The football club raise funds for Prostate Cancer UK as part of Team Garby, in memory of a dear friend Steve Garbett who died in November 2014. So far, we’ve been able to raise £144,503.36, a remarkable achievement and something the club are proud of.”

Last year’s sausage kit went viral when an online survey voted it the 7th worst kit in the world. It was featured in The Sun, The Daily Telegraph, The Metro, The Mirror, The Mail online, BBC radio 5live, Talk Sport, Smooth Radio, and with players appearing in the kits on SoccerAM.

The kits then went global, featuring on both TV and online programmes in Brazil, Germany, Italy, Portugal, Turkey, France and Sweden, and most noticeably on Fox Sports in the USA, but best of all, in Pig World magazine. 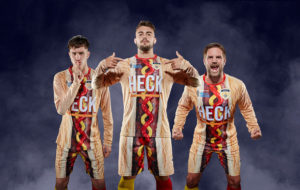 Then, on the weekend of September 16 2017, a film crew flew in from France to film the team in their sausage kits. It was broadcast on France 2, part of the state-owned France Télévisions group.

First team manager Dave Goodwin said: “Obviously eating sausage and chips after every home game must have suited our players because we had a very successful season last year winning the inaugural North Riding Football League division 1 and the reserves finished runners up in the Harrogate League division 1.’ Assistant manager Ian Richardson said, ‘after being voted 7th worst kit in an online survey last year, we are determined to make the top three with our hot dog kit.”

Heck Food founder Andrew Keeble said: “As a young company we were looking for a community project to have a bit of fun with and what better than a local football team. We didn’t envisage the original kit would become as popular as it did so we felt duty bound to create the ‘son of the sausage’. We too hope this kit can make the top three worst kits this year and if it doesn’t, we may have to bring out mark 3 next season.”

Bedale AFC Make Headlines with the ‘Wurst Kit’ Ever Sponsored by Heck added by Newsroom on August 1, 2018
View all posts by Newsroom →