By Newsroom on March 11, 2015Comments Off on Belvedere Challenges Mixologists Worldwide to Create a Legendary Cocktail 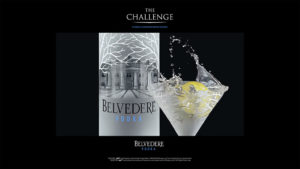 Belvedere Vodka invites the world’s best bartenders to compete in the Belvedere Challenge to create a legendary martini cocktail. James Bond’s signature martini cocktail, shaken not stirred, is widely recognized and this challenge gives masters of mixology an opportunity to put their twist on the iconic cocktail. Belvedere Vodka has partnered with the movie SPECTRE, the 24th Bond adventure from Albert R. Broccoli’s EON Productions, Metro-Goldwyn-Mayer Studios and Sony Pictures Entertainment, set for global release on November 6, 2015.

Made with Dankowskie rye, a superior grain grown in Poland’s Mazovian region and proprietary artisan water, Belvedere Vodka is the natural choice for any vodka martini cocktail, no matter the variation or twist. Its silky soft texture and delicate creamy rye notes provide the perfect foundation for the most iconic of all vodka cocktails. 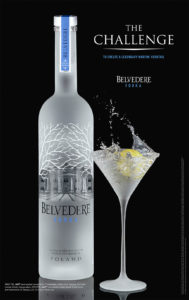 “We encourage bartenders to embark on the Belvedere Challenge and craft a martini cocktail to be enjoyed by generations of cocktail lovers.” says Claire Smith-Warner, Belvedere Vodka Head of Spirit Creation & Mixology.

From March 10th until April 12th, bartenders can enroll online by submitting a video here. They need to showcase their skill and ingenuity to shape a cocktail that will become truly legendary. The best 45 entries will be selected to compete in semi-final regional heats for Europe, Asia-Pacific and the Americas. Nine of the 45 bartenders will be selected to compete in the grand finale in London, on June 17-18-19.

On Belvedere World Martini Day, June 19 2015, the winner of the competition will be announced and he/she will become a Belvedere brand ambassador, serving the winning martini cocktail at a screening of the movie SPECTRE.

With its unparalleled taste, quality and character, Belvedere Vodka, the world’s original luxury vodka, is the perfect ingredient for a legendary martini cocktail.

Belvedere Challenges Mixologists Worldwide to Create a Legendary Cocktail added by Newsroom on March 11, 2015
View all posts by Newsroom →