By Newsroom on June 6, 2014Comments Off on Benihana Celebrate 50th Anniversary 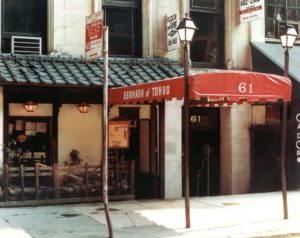 Fifty years ago, Benihana founder Rocky Aoki set out to bring authentic Japanese cuisine to America and offer guests something out of the ordinary: cuisine with an entertaining flair. His vision was clear and the first of its kind. He wanted the food prepared right at the table, “teppan-yaki” style, with theatrical effects performed by highly trained chefs.

“We view Benihana as more than just a restaurant; it is a destination where people come just as much for the entertainment as they do for the food,” said Benihana Inc. CEO Steve Shlemon. “We are extremely proud of the fact that guests have allowed us to be part of their lives for the past 50 years, as this is something few restaurants in the category have been able to accomplish.”

Over the years, Benihana has become a fan favorite that has served more than 100 million meals to guests, including numerous high-profile celebrities. The restaurant has grown from just 10 employees in 1964 to more than 7,500 employees today, including 880 teppanyaki chefs and 242 sushi chefs.

As part of its yearlong 50th anniversary celebration, Benihana Inc. launched its Passport Program in January that rewards participants for visiting Benihana locations throughout 2014. The guest who visits the most locations during the calendar year will receive a grand prize trip for four to Japan and a $1,000 Benihana gift card. In addition, the program will award two trips to Benihana restaurants in the U.S. and more than $7,000 in gift cards for unique location visits and frequency. Over 10,000 people have participated to date.