Billy Zane, known for his iconic roles in Titanic and Zoolander, is stepping into Colonel Sanders‘ iconic white suit. Actually, the suit is gold this time around to match the new menu item KFC is launching: Georgia Gold Chicken.

Each colonel matched his particular genre of chicken or promotional theme. Brawny, boisterous Riggle represented the football colonel. Permanently bronzed Hamilton played the extra crispy colonel. And Kartheiser, known for his role as Pete Campbell on Mad Men, starred as a 1960s heartthrob in his colonel ads. 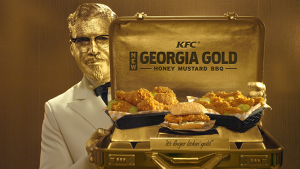 “Cal from Titanic was evil, and our colonel isn’t evil. But the idea is to have an irreverent, playful take on things,” Hochman said.

Zane, covered in gold, is nearly unrecognizable in the ad and potters around a gold-encrusted office extolling the virtues of gold and the new Georgia Gold chicken, which has a honey-mustard barbecue glaze.

“The whole idea of the campaign is, you don’t have to be a millionaire to eat like one,” Hochman said. “Billy Zane’s playfulness comes through in the ad.”

KFC has had success adding new, limited-time flavours to its menu and hopes to replicate that success with Georgia Gold, which is available through April. 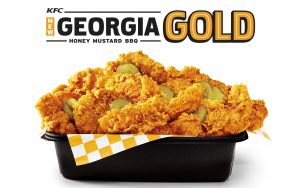 “Young people are looking for flavour variety, or flavours they can’t get anywhere else,” Hochman said. “We expect to continue that strategy to make our chicken more exciting and interesting by adding new flavour varieties.”

The rotating celebrity colonel strategy has paid off from a sales and marketing standpoint. KFC has experienced nine consecutive quarters of sales growth, and people under 35 had a 45 percent increase in brand consideration for KFC from 2015 to 2016, according to Hochman.

“We’re making the brand younger or we’re getting people to consider us for the first time, and switching the colonel has been a huge part of that,” he said.