By Newsroom on February 4, 2013Comments Off on Bruegger’s Bagels Celebrates 30 Years of Fresh-Baked Bagels 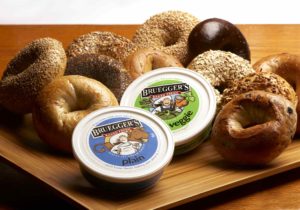 Bruegger’s Bagels will officially celebrate 30 years of baking fresh, authentic New York-style bagels on Feb. 7, with a tribute to its artisan baking heritage and loyal guests.

Until 11 a.m., guests can redeem a coupon for a complimentary bagel and cream cheese at any of Bruegger’s Bagels’ 300 bakeries in honor of the company’s 30th anniversary.

When Bruegger’s Bagels opened its first bakery in Troy, N.Y., in 1983, it was estimated that less than one-third of Americans had ever tasted a bagel.

Company founders Nord Brue and Mike Dressell would change that by perfecting an authentic New York-style bagel with a crisp shell and soft, chewy center, and sharing it with the rest of the nation.

Today, bagels are still kettle-boiled and baked in stone hearth ovens in small batches throughout the day at each of Bruegger’s Bagels’ 300 locations. The company still relies on the same recipe for its bagels with just five core ingredients: flour, water, malt, yeast and salt.

“Our signature bagels have been the cornerstone of our company,” said Bruegger’s Bagels President David Austin. “During this national event, we celebrate both our baking heritage and our loyal customers, who recognize the value of our commitment to fresh, high-quality products.”

Over the years, Bruegger’s Bagels has expanded to many communities and developed new traditions and products including its cold-packed, 100 percent made-in-Vermont cream cheese, which was introduced to bakeries in 1985; its Bottomless Mug Club, which gained popularity in 1990; and St. Patrick’s Day Green Bagels, which were first baked in Boston in the 1990s.

Guests who want to join the 30th anniversary celebration and receive a complimentary bagel with cream cheese can simply print a coupon, found on Bruegger’s Bagels’ Facebook page or through its email club. Guests can also present the downloaded coupon on their smartphone.

Feb. 7 will also mark the last day guests can vote in the company’s popular Facebook campaign, announced in January, to bring back a favorite bagel to the menu.

More than 30,000 people have already cast their votes for old-time favorites like Trail Mix, Cranberry Orange and Marble Rye, and the bagel with the most votes will return to Bruegger’s Bagels menu for a limited time this year. The winning bagel will be announced Feb. 12.