By Newsroom on August 10, 2016Comments Off on Burger King Introduces Whopperito, a Whopper Burrito 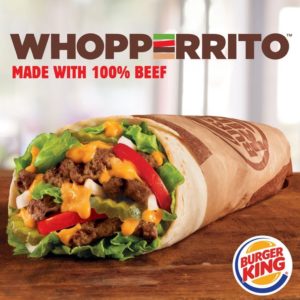 Burger King’s latest new item is taking a cue from Chipotle Mexican Grill, which is still reeling from a string of foodborne illness outbreaks.

The Whopperito, which puts Whopper burger ingredients like beef, tomatoes, onions, lettuce and pickles inside a flour tortilla, will be sold nationally beginning August 15. A queso sauce replaces the mayonnaise from the hamburger.

“It’s certainly one of the first times that we’ve tapped into the Tex-Mex category,” Alex Macedo, North American president at Burger King, said in an interview. “It’s one of the fastest-growing categories — consumers like the freshness of it. They like the mix of flavours.”

The US restaurant industry is facing a tough environment as consumers pull back spending. Chains are competing fiercely with low-priced meal deals and heavy advertising. Burger King, which reported second-quarter same-store sales that trailed analysts’ estimates last week, has been trying to use new fare to bring in more diners.

The burrito-burger mashup may help the chain attract Americans who are eating at Chipotle less after E. coli and norovirus outbreaks sickened dozens across the US. The idea for a Whopper burrito came from a franchisee with stores in Ohio and Pennsylvania and was tested in some locations in June, Mr. Macedo said. The Whopperito isn’t in response to any competitive activity, he said. 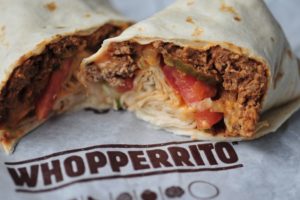 Earlier in 2016, Burger King started selling an Egg-Normous breakfast burrito, stuffed with sausage, bacon, eggs, hash browns, cheese and served with picante sauce. The chain, owned by Restaurant Brands International, has strayed from its traditional menu recently with the addition of hot dogs and deep-fried sticks of macaroni and cheese.

Yet burger chains have had mixed results when trying to branch into Mexican fare. McDonald’s in 2002 tried selling chicken fajita roll-ups at some Southern California restaurants. While the item never really took off, the chain still has breakfast burritos. Tim Hortons, also owned by Restaurant Brands, sells grilled chicken and steak fajita wraps with chipotle sauce, peppers, onions and cheese.

The Whopperito is $2.99 and will be sold for three to four months. But those wanting a little more heat in their Mexican fare may have to turn elsewhere. The Whopperito is meant to appeal to a broad swath of Americans. “It’s not too spicy,” Mr. Macedo said. “It’s funky, but it’s not polarizing.”