By Newsroom on June 1, 2018Comments Off on Burger King is Releasing ‘Whopper Donuts’ for National Doughnut Day

Even though Burger King doesn’t traditionally serve doughnuts, this year, the fast food chain wants to get in on the action for National Doughnut Day. 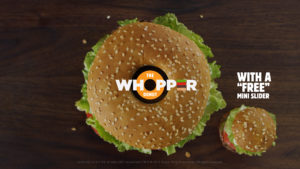 Friday, June 1, they will be releasing what they’re calling the “Whopper Donut.” The creation isn’t sweet, though — it’s basically the classic Whopper burger with a hole cut out from the middle to make it look like the beloved pastry. But don’t worry, you’re not losing out on a part of your burger: It will be served on the side as a bite-sized treat.

Only five select locations will be selling the creation, which means you have to live in Boston, Miami Beach, Los Angeles, New York City or Salt Lake City in order to get your hands on it. 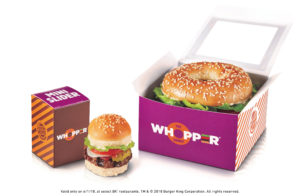 celebrate the holiday with a more traditional doughnut, Krispy Kreme is handing out free doughnuts to customers on Friday, while Dunkin’ Donuts is giving away a free doughnut to anyone who purchases one of its drinks.

Shoppers who stop by the bakery at Walmart will be treated to a complimentary glazed doughnut, while pizza chain Papa John’s is using the opportunity to roll out doughnut holes for a limited time. Anyone who purchases a pizza from Papa John’s online on Friday will receive a free order of the doughnut holes.

Burger King is Releasing ‘Whopper Donuts’ for National Doughnut Day added by Newsroom on June 1, 2018
View all posts by Newsroom →