By Newsroom on June 11, 2015Comments Off on Burger King Rolls Out Summer BBQ Menu For Second Year 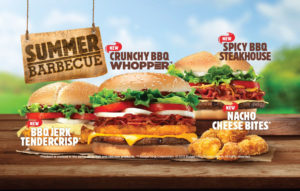 Burger King has introduced a seasonal BBQ summer menu this year for the second time as it looks to drive footfall to restaurants through the season in the UK.

The fast food giant has re-introduced the BBQ Jerk Tendercrisp, Crunchy BBQ Whopper and Spicy BBQ Steakhouse burger to its menu, as well as Nacho Cheese Bites and Chicken Fries until September.

It has introduced a range of frozen drinks including a Pina Colada smoothie, frozen lemon limeade and frozen cherry berry and also a Toffee Crisp ice cream fusion.

The summer BBQ menu, first introduced in 2014, will be promoted via in-store and digital activations. 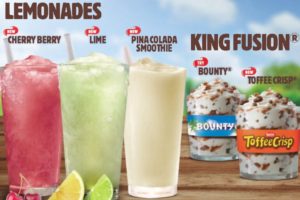 “Burger King is committed to delivering innovative, great-tasting food at affordable prices to all of our customers”, said Matthew Bresnahan, marketing director, Northern Europe, Russia, & Africa. “The popularity of our Summer BBQ menu last year meant we had to bring it back this summer but with a few enhancements so that we keep on surprising and delighting our customers.”

In April, the chain kicked off a ‘Party in the Park’ promotion, adding Pork BBQ Whopper, Mushroom Swiss Steakhouse, Ciabatta Chicken TenderCrisp and Chicken Fries to its menu.

Burger King Rolls Out Summer BBQ Menu For Second Year added by Newsroom on June 11, 2015
View all posts by Newsroom →