By Newsroom on March 31, 2016Comments Off on Burger King Seeing Red with ‘Angriest Whopper’

Burger King reheated some past ideas to cook up the new Angriest Whopper, a red-bun burger that could help the chain reinforce its flame-grilled and spicy branding and entice diners to spend a bit more. 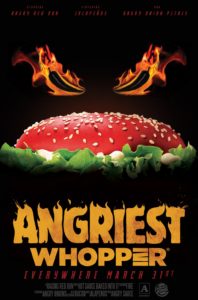 Burger King, in comedic recognition of making its own sequel of sorts, is even promoting the burger with a nod to movie sequels. A spot set to be shown in movie theaters plays a bit like a trailer with a movie trailer-style opening screen, shots of lava, a helicopter and flames. Lines include: “The only way to handle the heat is to embrace it.”

The new Angriest Whopper has a red bun with hot sauce baked into it and is topped with “flaming onion petals, spicy angry sauce and jalapenos,” as well as bacon, American cheese, iceberg lettuce, tomatoes and mayonnaise.

It seems like it packs a bit of a heat upgrade from the Angry Whopper, which was topped with “angry” onions and sauce, jalapenos, pepper jack cheese, bacon, tomatoes, lettuce and mayonnaise, and came on a standard sesame seed bun.

Burger King has had success with spicy options lately. Fourth-quarter sales growth was helped by items including buffalo and fiery versions of its chicken fries and the A.1. Halloween Whopper.

The Angriest Whopper is Burger King’s latest limited-time offer. Such items help chains entice diners to visit for something different and perhaps spend a bit more. The Angriest Whopper has a suggested price of $5.49, or $7.49 in a combo with a small drink and fries. Along with its new grilled hot dogs, Burger King has also been promoting a 5 for $4 value play in recent months: a bacon cheeseburger, four chicken nuggets, small fries, small drink and a chocolate chip cookie. 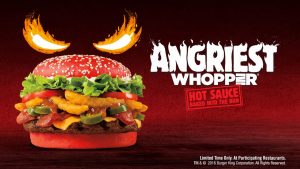 It was not immediately clear what kind of hot sauce is being used in the Angriest Whopper. The A.1. Thick and Hearty sauce in the Halloween Whopper’s black bun came from Kraft Heinz, which like Burger King counts 3G Capital as one of its biggest owners.

Agencies on the Angriest Whopper campaign include David, Code and Theory, ABPR and Horizon.