By Newsroom on January 24, 2018Comments Off on Burger King Takes on Net Neutrality via “Whopper Neutrality” Social Experiment 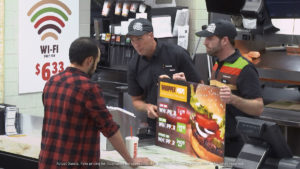 The recent repeal of Net Neutrality means that internet providers can throttle bandwidth, offer paid fast lanes, block and prioritise content as they wish. The Burger King brand reenacted what this repeal could mean at the counter with people buying Whopper Sandwiches.

During the Whopper Neutrality experiment, which was devised by creative agency David, Burger King restaurant guests that ordered their Whopper Sandwiches at the regular price had to wait a very long time to receive their orders. Other customers received their orders swiftly, because they paid increased fees for faster service. This caused infuriation. When the ultra-aggravated customers learned they were part of this Whopper Neutrality experiment, everything clicked. 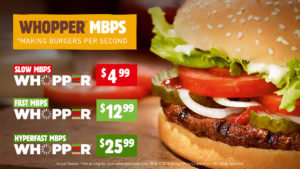 “We believe the internet should be like Burger King restaurants, a place that doesn’t prioritise and welcomes everyone,” said Fernando Machado, Burger King Global Chief Marketing Officer. “That is why we created this experiment, to call attention to the potential effects of net neutrality.”

All guests are encouraged to support Net Neutrality by signing the petition at Change.org/SavetheNet.