By Newsroom on February 28, 2017Comments Off on Burger King’s New Ads Show Actual BKs that Caught Fire from Flame-Grilling 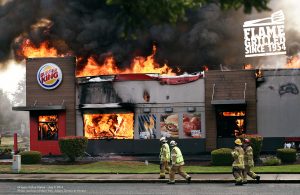 Burger King’s special brand of off-the-wall advertising has reached a new level: in its latest print campaign, the fast food chain is featuring three photographs of actual restaurants that have caught on fire in recent years.

The photos, which show Burger Kings aflame in Italy, Pennsylvania and Oregon, serve to remind people that the brand takes its flame-grilling seriously. A quick Google search of the incidences reveals that no one was seriously hurt in the aforementioned BK fires, which took place in 2004, 2015 and 2016, respectively. 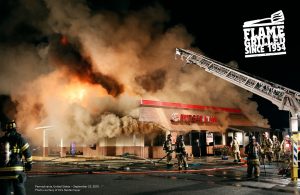 According to David Miami, the agency behind the campaign, “more Burger King restaurants have burned down than any other food chain” since 1954.

The point? To remind people that BK always flame-grills its burgers—which usually has tasty consequences, but can sometimes have disastrous ones. 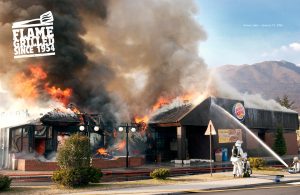