By on June 21, 2016Comments Off on ButterflyCannon Create Packaging Design for Glenmorangie Tarlogan 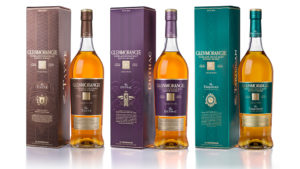 Glenmorangie Legends is the brand’s exclusive Travel Retail Collection, each expression celebrating a legendary story of the lands that have been home to the Glenmorangie Distillery since 1843. ButterflyCannon worked with the Glenmorangie team to identify the overriding and individual concepts, as  well as designing the range’s packaging.

Glenmorangie Tarlogan is the third expression to be launched into the collection and is inspired by the legend of Tarlogan, a chieftan of the Pictish people who it is said gave his name to the Tarlogie Wood to the South of the Glenmorangie Distillery and which safe guards their precious water source. 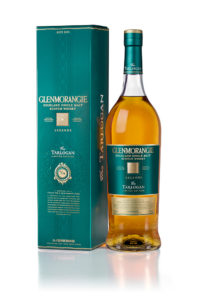 Dr Bill Lumsden, Director of Whisky Creation and Distilling at Glenmorangie, chose a parcel of spirit matured in ex-bourbon casks, before marrying it with a parcel of single malt aged in virgin oak casks to reflect the purity and tranquillity of this ancient environment.

Taking inspiration from this magnificent woodland, the packaging is wrapped in a rich, metallic, forest green, which is accented with splashes of Glenmorangie gold, used to pick out key details such as the design’s central icon.

Derived from a Pictish ceremonial shield and containing within it a representation of a Pictish chieftan on horseback, the device is framed by richly detailed, sculpturally debossed natural forms that pay homage to both the natural Highland landscape and the intricate stone carvings that are the only imprint the ancient Pictish people left upon it.

Elsewhere in the background, Glenmorangie’s iconic ‘watermark’ is adapted to continue this theme, with a graphical representation of Pictish iconography that adds a further layer of detail and mystery. 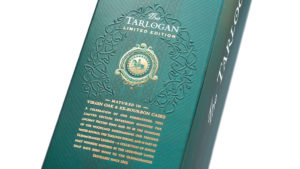 Jon Davies, Creative Director at ButterflyCannon comments, “Building on the richly detailed story and aesthetic we created for the Legends Collection, the design team have created an evocative and impactful design for Glenmorangie Tarlogan, that makes it a fitting 3rd edition to the impressive Glenmorangie Legends lineup.”

Sébastien Gratiot, Brand Manager at Glenmorangie adds, “With their design for the packaging of Glenmorangie Tarlogan, ButterflyCannon have taken the story and inspiration for this magnificent, limited edition single malt whisky and brought it compellingly to life.”

ButterflyCannon Create Packaging Design for Glenmorangie Tarlogan added by on June 21, 2016
View all posts by →