By Newsroom on October 13, 2016Comments Off on California Prune Board Shortlisted For Polish PR Industry Oscars 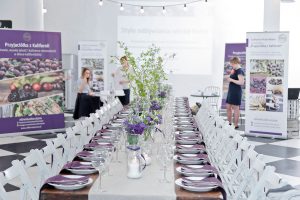 The California Prune Board, whose responsibilities include the marketing of the world’s most sought after prunes, has been shortlisted as one of three finalists in two categories in the prestigious Polish Public Relations Consultancies Association ‘Golden Clips’ PR Awards.

The final of the awards, dubbed the Polish PR industry’s equivalent of the Oscars, take place in Warsaw on 2nd December. The high profile event, now in its 14th year, will witness California Prunes’ ‘Friend from California’ campaign going head to head with some of the world’s most powerful brands to compete for the top spot in the Food Sector and Effectiveness categories.

Commenting on reaching the finals, Esther Ritson-Elliott, European Marketing Director for the California Prune Board said, “We have only been actively marketing our superior quality prunes in Poland for two years and to have been nominated in not just one but two categories in such a short space of time represents a major feat in its own right.”

“The ‘Friend from California’ campaign has proved highly successful in educating both trade and consumer stakeholders on the key health and nutritional benefits associated with California’s designer prunes. Our partners in Poland – People PR – have done a superb job in developing an authoritative and innovative programme of activity which is now being judged alongside some of the world’s most iconic brands such as Coca-Cola, IKEA, REEBOK, Deutsche Bank,” added Esther.

“We are looking forward to taking our place at the finals in December but regardless of the outcome, we are already delighted with the impressive achievements of the ‘Friend from California’ campaign which demonstrates once again that it is creativity rather than spend that drives marketing success,” concluded Esther.

California Prune Board Shortlisted For Polish PR Industry Oscars added by Newsroom on October 13, 2016
View all posts by Newsroom →