By Newsroom on April 15, 2014Comments Off on Chakra Honoured At The 2014 Asian Business Awards 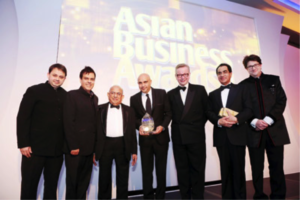 Chief Guest and UK Education Secretary Michael Gove said, “Today we celebrate some of the most successful Asians in the UK many of whom started with a small idea and worked their way up the ladder to where they are today.”

Arjun Varma owner of Chakra said after accepting the award, “It is an honour to receive this prestigious award and most humbling given the calibre of the competition.”

Andy Varma the culinary genius behind the food was quoted as saying , “Moments like these are reassuring as it shows my team and me that the passion and hard work we have put into Chakra have yielded some fabulous results.”

Situated on the border of Notting hill and Holland Park, Chakra is a local favourite and a destination for International gourmands globally. 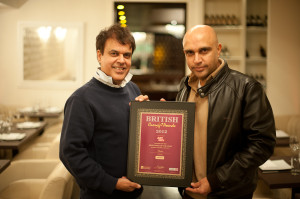 The interior of Chakra resonates, style and glamour with its colour scheme of cream and dark mahogany Chesterfield banquet seating, vintage cigar style panelling, Madras Ice-cream leather and Oak Colchester flooring has been combined with a rustic stone element and warm gold lighting.

With a stunning & eclectic artisanal menu created by Executive Chef Andy Varma, Chakra’s inspiration comes from the highly evolved, regal & diverse kitchens of the Royal Palaces in Lucknow to the best Punjab kitchens of Patiala, and features some of the most coveted and traditional secret artisan recipes of the royal kitchens.

The Chakra Team also run Chakra Events, which recently won some of the most prestigious catering contracts and continue to innovate in cuisine, service and presentation.

Chakra Honoured At The 2014 Asian Business Awards added by Newsroom on April 15, 2014
View all posts by Newsroom →