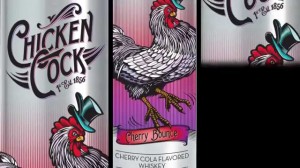 George Washington is rumored to have chopped down a cherry tree or two in his time. Perhaps it was to supply the ingredients for his most beloved libation. George Washington’s favorite liquor was his wife Martha’s recipe for Cherry Bounce, one of 18th century America’s most popular and high-spirited beverages.

In honor of National Make Up Your Own Holiday Day, Chicken Cock American Whisky declares from this day forward March 26th will be National Cherry Bounce Day. To celebrate, Chicken Cock decided to launch its own version of our forefather’s favorite libation. But as a brand with roots tracing back to 1856 is inclined to do, Chicken Cock has seen Martha and George and raised them one by adding some natural cherry cola flavor to its 21st century version.

With a colorful history spanning three centuries, the original Chicken Cock was infamously a staple of Prohibition-era speakeasies, including the Cotton Club, where it would be smuggled inside in non-descript tin cans. After almost a century-long hiatus following the destruction of its original distillery, Chicken Cock is back with a vengeance, selling more than 150,000 bottles (12,000 9L cases) in 2013, making it one of the hottest craft liquor brands to launch (or rather re launch) last year.

“As a brand originally launched 19 years before Jack Daniels, it was only appropriate that we dig through the archives to introduce our next flavor. We’ve given our Cherry Bounce flavor a modern spin by making it a cherry cola infusion,” said Matti Anttila, president of Island Club Brands, which owns Chicken Cock. “We think our Founding Fathers would approve, and that is cause for some serious celebration.”

Cherry Bounce can be enjoyed as a cold shot, benefiting from Chicken Cock’s specially designed, quick-chill aluminum bottle, a nod to the brand’s distinctive bootlegged tin cans. It can also be served with cola and other similar beverages.