By Newsroom on January 29, 2014Comments Off on Coca-Cola Unveils Cans With Hand-Drawn Swallow Designs In Vietnam 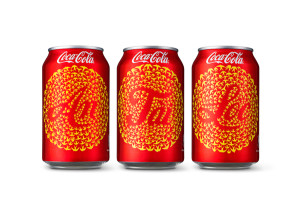 Coca-Cola has unveiled beautiful limited edition can designs in Vietnam to coincide with Têt, the Vietnamese New Year and the most-celebrated holiday in the country.

Designed by Ho Chi Minh-based agency Rice Creative, each can features hundreds of hand-drawn swallows arranged around a lovely custom script that forms a series of meaningful Vietnamese wishes. The three characters are “An”, which means “Peace”, “Tài”, which means “Success”, and “Lộc” which means “Prosperity”. They are widely exchanged during Têt and are found on traditional decorations.

Coca-Cola is widely consumed during the festive season, and the cans are a clever and modern way of spreading millions of Têt wishes while still paying heed to Vietnamese tradition and culture.

View the rest of the striking can designs below.

Coca-Cola Unveils Cans With Hand-Drawn Swallow Designs In Vietnam added by Newsroom on January 29, 2014
View all posts by Newsroom →