By Newsroom on March 18, 2014Comments Off on Diageo Defends Honor and Quality of Early Times Whiskey

Claiming the integrity of Tennessee whiskey is “under attack” Brown-Forman‘s Jack Daniels asserts the only way for Tennessee whiskey to be a “premium product representing a world-class standard and utmost quality” is for it to be aged in new oak barrels.  Interestingly, according to the website of Brown-Forman owned Early Times whiskey, the brand is aged and barreled in “used oak barrels”.  Therefore, by their logic, Brown-Forman has deemed its own product inferior. 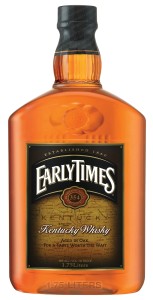 Despite being a competitor to Early Times, Diageo has rushed to Early Times’ defense. George Dickel Master Distiller John Lunn provided perspective on the issue.  “At George Dickel we use new oak barrels, but that is because we choose to make whiskey that way.  We don’t think there should be a law that says this is how we, or anyone else, have to make whiskey,” explained Lunn.

Diageo firmly believes a single company should not be able to unilaterally determine the definition of an entire category.  At its base, it is anti-competitive and protectionist. Diageo supports a return to the flexibility that Tennessee whiskey distillers have had for the past 125 years, up until last year when Brown-Forman convinced the Tennessee legislature to define Tennessee whiskey as the Jack Daniel’s recipe.

Guy L. Smith, IV, Executive Vice President, Diageo North America, and a former resident of Tennessee said, “Brown-Forman’s sleight of hand legislation they managed to get passed last year, which many refer to as simply ‘The Jack Daniels recipe law’, creates an anti-competitive situation that will stifle innovation from skilled Tennessean distillers, both large and small.”

Continued Smith, “We feel that allowing distillers flexibility within a general set of guidelines helps create a thriving and competitive Tennessee whiskey industry.  And that is in the best interest of all distillers, large and small, as well as the state of Tennessee.”

Diageo Defends Honor and Quality of Early Times Whiskey added by Newsroom on March 18, 2014
View all posts by Newsroom →