By Newsroom on February 5, 2015Comments Off on Does Denmark Love Valentine’s Day? Chocolate Brand Uses Science to Find Out

The tradition of Valentine’s Day has never really made it big in Denmark. A recent study showed that only 2% of Danish men love Valentine’s Day. In order to turn this around, Danish chocolatier Anthon Berg, with the help of creative agency Robert/Boisen & Like-Minded, decided to investigate if they could convert some of the nonbelievers into actually enjoying being romantic towards their loved one in a Valentine experiment.

The actual experiment was conducted by the American Professor in neuroeconomics, Paul Zak, – a well renowned TED speaker and writer of the book ‘The Moral Molecule’. In the experiment they tested the oxytocin levels (also known as the ‘love molecule’) of the males in 32 Danish couples. 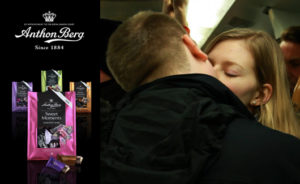 In an isolated and surveilled setting, the men were asked to tell their female partner why they were important to them and to hand them over a box of chocolates. Dr. Zak’s team measured the oxytocin levels before and after. So, what was the impact on these nonbelievers? The answer is in the blood…

Does Denmark Love Valentine’s Day? Chocolate Brand Uses Science to Find Out added by Newsroom on February 5, 2015
View all posts by Newsroom →