By Newsroom on May 1, 2018Comments Off on Domino’s Ties up with Sky Sports News to Target Hungry Sports Fans

From May 1, Domino’s, one of the UK’s favourite pizza brand, is broadening its ‘Official Food of Everything’ strategy by sponsoring Sky Sports News from 5pm to 7pm daily to build its appeal amongst sports fans.

The deal was developed by Sky Media which worked closely with Arena Media to develop initiatives that are relevant to all ‘pizza purchasing triggers’. These include pre-live Premier League football, Box Office boxing and importantly during crucial World Cup key moments. The campaign aims to align Britain’s best loved pizza brand more closely with the number one destination for breaking sports news. 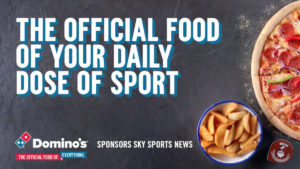 Tony Holdway, Sales & Marketing Director at Domino’s, said, “Sky Sports News offers us a great opportunity to increase our prominence around one of our audiences’ key passion points. By sponsoring this multi-platform brand, we can continue to be at the centre of sporting conversation particularly during what is sure to be a huge summer of sport.”

Paul Barrett, Head of Commercial Partnerships at Sky Media, said, “Sport and pizza go hand in hand – from ‘pizzagate’ at Old Trafford in 2004, to Claudio Ranieri offering the Leicester team pizzas in return for clean sheets in their title winning season! We are delighted to further extend our relationship with Domino’s, and to continue developing strategies and concepts with Arena Media that utilise our content, data and addressable ad products to drive Domino’s business forward.”

The campaign was brokered by Arena Media. It runs from 1st May until 31st December, aligning itself with the highly anticipated summer of sport.

Domino’s Ties up with Sky Sports News to Target Hungry Sports Fans added by Newsroom on May 1, 2018
View all posts by Newsroom →