By Newsroom on October 17, 2013Comments Off on First-ever Marinated Chicken Successfully Cooked in Space, Noshed on Earth

Soy Vay, a premium line of preservative-free, kosher marinades, confirmed that it has boldly cooked chicken where no teriyaki had gone before: the stratosphere. History was made on October 12 when chicken marinated in the sauce was confirmed to have successfully returned to Earth after it was launched to 104,572 feet and slow-cooked in space.

The mission’s success was made possible with the help of a team of physicists and (real) rocket scientists who partnered with Soy Vay to design the A Pollo ’13 capsule and hone its space cooker technology. Made of polystyrene foam and sculpted to resemble a bottle of Soy Vay, the A Pollo ’13 capsule was developed to insulate the cooking process from the sub-zero temperatures of the upper atmosphere.

Inside, one pound of organic, free range chicken breast marinated in Soy Vay Veri Veri Teriyaki sauce was vacuum-sealed in plastic and suspended in a water bath. A chemical reaction initiated just prior to the launch heated the water surrounding the chicken, which slowly cooked the meat to 155 degrees F over the course of the 1 hour, 59 minute space voyage. 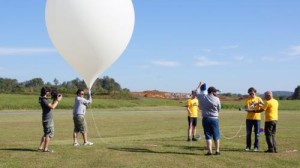 “The sweet and savory flavors in Soy Vay marinades make it easy for cooks of any level of experience to deliver awesome, out-of-this-world dishes, here on Earth,” said Soy Vay marketing manager Tad Kittredge. “We realized that the only reasonable way to take teriyaki to the next level would be to cook it outside the kitchen, far beyond the grill, and among the stars – so we found a way to do it!”

To avoid disturbing the gentle cooking process with the intense vibrations of a rocket launch, the A Pollo ’13 capsule was tenderly carried into the stratosphere, by a weather balloon. When the balloon burst, due to the lowered atmospheric pressure, a parachute opened, slowing the space-cooked chicken’s fall to Earth. Upon landing, it was located by a team of Soy Vay chicken chasers, promptly sampled and declared to be undeniably delicious.

Space chicken enthusiasts near and far convened at Cumberland Park in Nashville to witness the A Pollo ’13 launch. They enjoyed less adventurously prepared, but similarly delicious, bites of Soy Vay marinated chicken, served hot off the grill.

First-ever Marinated Chicken Successfully Cooked in Space, Noshed on Earth added by Newsroom on October 17, 2013
View all posts by Newsroom →