By Newsroom on April 4, 2014Comments Off on Fundraising Triumph For UK’s Food & Hospitality Industry

The UK food and hospitality industry was out in force last night, raising an incredible £135,000 for its ongoing Food for Good campaign in aid of Farm Africa which is playing a vital role in tackling hunger in eastern Africa.

The enormous sum was raised by over 200 guests from the industry at the Food for Good Ball, a major fundraising event organised by the leading UK charity Farm Africa. 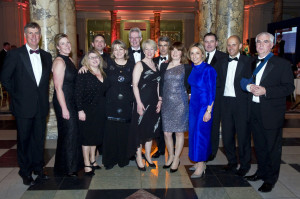 And with each place at the ball sold for £350 – a sum that can help take an African family out of hunger – each guest was literally transforming lives in eastern Africa by simply being there.

The ball was staged under the Dome in the magnificent surroundings of London’s Victoria and Albert Museum. Weighing in with particularly strong support for the evening were the Ball’s Platinum Sponsors: ABP Food Group and Compass Group UK and Ireland.

The £135,000 raised last night – in addition to £750,000 already raised since the first challenge event in 2011 when food industry leaders climbed Mount Kilimanjaro – will play a vital role in helping Farm Africa to realise one of its key aims this year: expanding the range of its life-changing work to 2 million people across eastern Africa.

Responding to the incredible amount raised, Farm Africa’s Chairman Richard Macdonald, said: “Last night was a powerful demonstration of what can be achieved when the industry comes together, even in the face of a very challenging economic climate. But last night’s Food for Good Ball is just the start of something much bigger as we redouble our efforts to raise even more, so we can achieve our aim of broadening our work to end hunger.”

Sumptuous dinner and high-class entertainment in a splendid location 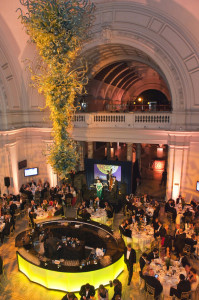 One of the undoubted highlights of the evening was a sumptuous dinner prepared by the Michelin-starred chef Jason Atherton of Pollen Street Social. Guests were treated to a wild duck and bramble salad starter, roasted beef fillet with braised oxtail and marrow and horseradish mash, before finishing with an exquisitely exotic coconut rice pudding served with pickled mango.

The restaurant supremo, who describes Farm Africa as “a cause close to my heart”, was thrilled to play such an important part in the evening’s success, saying: “By coming together to raise as much money as we could on the night, the food and hospitality sectors have shown just how much we can all do in the coming year and beyond to support Farm Africa’s work in tackling hunger – for good.”

In addition to enjoying a Michelin Star quality menu, guests were also treated to a wide range of entertainment throughout the evening. Former England and British Lions rugby player Martin Bayfield acted as Master of Ceremonies, regaling guests with a highly amusing speech over dinner; the Surrey East African Dance and Arts Group provided a distinctive African flavour to the 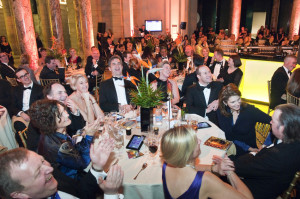 evening with a dance performance; and the Noa Alvarez Quartet lent the evening some late night sophistication with an after dinner jazz set.

Looking back on the evening, Martin Bayfield said: “As a former international rugby player I know a thing or two about big occasions. So I’m extremely proud to have played my part in ensuring that Farm Africa’s first Food for Good Ball was such a success. Most importantly the money raised will do so much to transform the lives of rural communities in Africa.”

You can find out much more about both Farm Africa’s Food for Good Ball and how you or your company can get involved in Food for Good here.