By Newsroom on May 16, 2013Comments Off on Goose Island Beer Company Celebrates 25th Anniversary 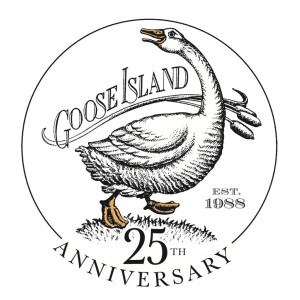 Goose Island Beer Company celebrated its 25th year of making great beer and to commemorate this amazing journey, Goose Island will release an extra special bitter beer, offer fans a chance to show their love for the beer with a Facebook contest and to close out their celebrations they will host an anniversary party on Sunday, May 19, 2013.

Founded by John Hall in 1988, Goose Island was one of the first craft breweries established in the Midwest. Goose Island is acclaimed for creating world-class ales including 312 Urban Wheat Ale, Honker’s Ale, India Pale Ale , Matilda, Pere Jacques, Sofie, and a wide variety of seasonal, draught only and barrel-aged releases including Bourbon County Brand Stout, the original bourbon barrel-aged beer.

“When we started brewing back in 1988, craft beer options in Chicago were non-existent,” said John Hall , founder, Goose Island Beer Co. “Twenty-five years later, we like to think we had something to do with improving the Chicago beer scene.”

This special ale exhibits the rich malt and rustic hop flavors found in the English ales that originally inspired their founder, John Hall , to open Goose Island in 1988. Goose Island’s Anniversary Ale comes in at 6.4 percent ABV and will be available at the brewpubs on draught and in six-pack bottles later this month.

“We wanted to celebrate our 25th anniversary by bringing back an unreleased beer called ‘Honker’s Deluxe’ that is pleasant to enjoy and a testament to our brewing team’s goals,” said Brewmaster Brett Porter. “We brewed the beer with Maris Otter malt and dry-hopped with East Kent Goldings.” 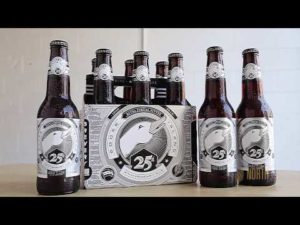 Goose Island will celebrate with its fans across the U.S. through a Facebook photo sweepstakes beginning on May 20, 2013. Fans can show some love for their favorite Goose Island beer by submitting a photo on Goose Island’s Facebook page. Select photos will be promoted daily, and 2,500 participating fans will receive the limited-edition Goose Island 25th Anniversary 16 oz. Nonic Glass.

To thank Chicago fans for this milestone moment, Goose Island will be hosting an anniversary party outside of the Fulton Street Brewery from 12 – 3 p.m. on Sunday, May 19. At the party, fans will get a chance to sample all of Goose Island’s iconic beers such as 312 Urban Wheat Ale, Honkers Ale, IPA, Matilda, Green Line, Summertime, and 25th Anniversary Ale. Also, the anniversary party will feature special taps of Bourbon County Stout Coffee, Golden Goddess, Sofie Paradisi , Sour Pere Jacques and much more.

Friends from local breweries, including Virtue, Half Acre, Emmett’s Brewing Company, among others, will also be tapping their favorite beers for participants to enjoy. As part of Goose Island’s commitment to the local community, a portion of the proceeds from the event will be donated to the Illinois Craft Brewers Guild. To purchase tickets to the anniversary party, visit www.gooseisland.com.