By Newsroom on July 7, 2016Comments Off on Gorgeous New Chipotle Film is an Animated Story of Rivalry and Love

After two hugely successful films in their “Cultivate” campaign — “Back to the start” in 2012 and “The scarecrow” in 2013 — Chipotle and CAA teamed up with Passion to create “A Love Story”, an ambitious animated short directed by Passion Pictures’ Saschka Unseld.

The film tells the story of Ivan and Evie, whose innocent enterprises – juice stands on opposite sides of the street in their local neighbourhood – become a saga of jealousy that sees them competing for years and years as their ‘businesses’ grow beyond their control. 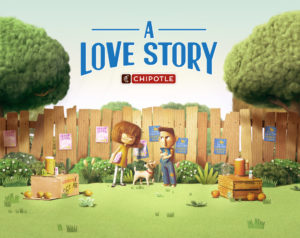 Before they know it, they’re the rival owners of giant factories, with depths of dark rooms where automated machines swirl chemicals, creating hundreds of artificial food items for their expansive menus. In a dramatic overturn, Evie and Ivan realise that together, they can ditch the monsters their restaurants have become and ‘Cultivate a Better World’, putting the important things in life first.

The film was a huge undertaking of over eight months at Passion Pictures’ animation studios in London. It comprised a huge crew to bring its story to life. Director Saschka Unseld, who juggles directing for Passion with his role as Creative Director with Oculus Story Studio, said: “Passion has such a root in character animation, and I find it invigorating to work with a team and company where that comes first, because it’s what people will connect with afterwards.”

Gorgeous New Chipotle Film is an Animated Story of Rivalry and Love added by Newsroom on July 7, 2016
View all posts by Newsroom →