By Newsroom on November 21, 2014Comments Off on Grey Goose Vodka to Auction Original Works by Celebrated Artisit Kehinde Wiley

The exciting finale of a unique collaboration between Grey Goose Le Melon flavored vodka and renowned artist Kehinde Wiley will culminate in a series of events during Miami’s popular art fair next month. For the first time, the “Modern Kings of Culture” portraits depicting Spike Lee, Swizz Beatz and Carmelo Anthony will be publicly displayed before being auctioned off for charity in collaboration with Sotheby’s. Fans of Grey Goose vodka, Wiley and the ‘modern kings’ from across the country will have the chance to view the works and bid in advance online at Paddle8 before the official charity auction event on December 4. 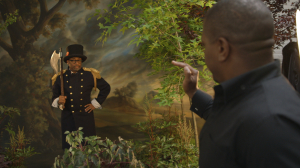 Grey Goose Le Melon, launched this past summer, is expertly crafted using Grey Goose vodka and the prized essence of ripe, juicy Cavaillon melons. Specifically chosen by Grey Goose creator Francois Thibault for its superior quality and intriguing French history, this intensely fragrant melon from Provence, France, was said to be relished by French kings, nobility and artists. With a succulent flavor as precious as its limited harvest, this melon has been a luxury delicacy throughout history. The highest nobility were said to have consumed the Cavaillon melon with fervor. Legend has it that kings traded gold for exclusive access to this treasured fruit. Other historical figures, including Paul Cezanne and Alexander Dumas, also cherished the Cavaillon.

It was this heralded history that inspired Grey Goose to commission Kehinde Wiley to create a series of custom portraits honoring today’s “modern kings” who have charted extraordinary paths to achievement. Using his signature style that perfectly juxtaposes royal and modern iconography, Wiley created the “Modern Kings of Culture” portrait series featuring Spike Lee, Swizz Beatz and Carmelo Anthony. These iconic individuals, like Thibault, whose passion for crafting extraordinary spirits gave rise to the world’s first super premium vodka – truly represent the Fly Beyond spirit at the heart of Grey Goose. 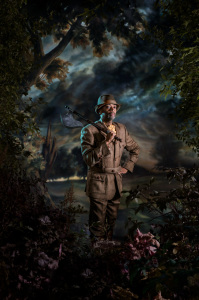 “I was interested in rethinking the way that kings are being made, and Grey Goose Le Melon plays to the strengths of history,” said Wiley. “With this program we are celebrating contemporary royals – Spike Lee, one of America’s most celebrated visual thinkers; Swizz Beatz, an important cultural leader in American music, and Carmelo Anthony, a sports leader that the world recognizes. These men are flying beyond by understanding that the world in front of you doesn’t have to be the only one.”

“Kehinde’s extraordinary talent for combining modern culture with the style of historical portraits is truly unique,” said Lyle Tick, VP Managing Director, Grey Goose vodka. “Much like our Maître de Chai, Francois Thibault, Kehinde has an exceptional ability to create something distinctive and wildly relevant, while going against the grain and challenging what is both expected and accepted by the world around him. We know his spirit inspires our consumers – and we hope this call to action to bid on these moving works will resonate strongly with the art community.” 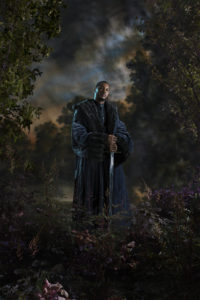 To commemorate this exciting collaboration, Grey Goose will auction these original Kehinde Wiley works in conjunction with the world famous auction house Sotheby’s at the finale celebration during Miami’s popular art fair next month. A line-up of targeted pre-sale bidding and viewing activations have been put in place with the ultimate goal of raising significant funds for the “kings” charities, which include The Spike Lee/NYU Graduate Film Production Fund, The Carmelo Anthony Foundation and the Bronx Charter School For The Arts. The Brooklyn Museum in New York will also be a beneficiary; Grey Goose will support Kehinde Wiley: A New Republic, a major exhibition at the Brooklyn Museum, February 20 through May 24, 2015.

The “Modern Kings of Culture” auction goes live November 20 via the premiere online auction platform Paddle8. There fans across the country can seamlessly view the collection and bid on the works. Beginning December 1, the portraits will be featured at a public exhibit at The Redbury Hotel, where Miami art fair-goers can also view and bid on the works. On December 2nd, an intimate preview will take place at a private home where members of the auction team will accept pre-sale bids from potential buyers, celebrities and art-world notables. Finally, renowned Sotheby’s auctioneer Gabriela Palmieri will host the exclusive live poolside auction event on December 4th at the SLS Hotel.

The Modern Kings and Charities 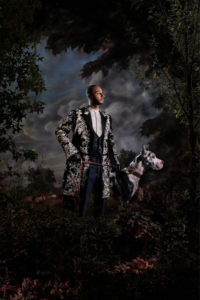 Emmy Award winner and Oscar nominated filmmaker, producer, writer, and actor Spike Lee was the first of the Grey Goose Le Melon “Modern Kings of Culture” portrait series subjects. The portrait was unveiled at an exclusive event in New York City mid-June. A true visionary in the film industry, Spike’s achievements – include over 35 films produced by 40 Acres and A Mule Filmworks, including iconic films such as Do The Right Thing, Malcolm X, and Project 40. 40 Acres and A Mule Filmworks also develops and supports programs that provide African American and underprivileged children with opportunities to receive professional instruction. The Spike Lee/N Spike Lee Film Production Fund will be the recipient of proceeds from Lee’s portrait. The Fund offers completion funds to five promising thesis projects each year to help students bring their visions to life in film, and has honored more than forty students to date.

The portrait featuring Grammy Award-winning music producer Kasseem Dean, aka Swizz Beatz, was revealed during the BET Experience in Los Angeles in late-June. Starting out as a DJ at the age of 16, the music mogul has been praised by many as the “greatest producer of all time,” with work including hits for Jay Z, T.I., and Beyoncé among others. His 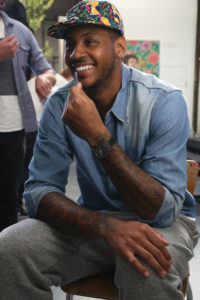 unique creativity and craftsmanship have solidified his royal status in music, and he is firmly situated in the canon of musicians who transcend genres, with influence seeping into fashion, art and technology. An advocate for arts in education, Beatz is committed to assisting the Bronx Charter School for the Arts with achieving its fundraising objectives. The proceeds from his portrait will support the school’s arts education programs, as well as its academic intervention programs.

Two-time Olympic Gold Medal winner and NBA sensation Carmelo Anthony’s portrait was unveiled during an exclusive event during ESPY Awards week in Los Angeles in July. For most of his 10-season career, Anthony has been regarded as one of the NBA’s best scorers, and an offensive dynamo. His influence on and off the court makes him a true leader and a king of culture. Anthony started The Carmelo Anthony Foundation, a nonprofit organization created to positively impact the lives of those living in under-served communities through 3 key focus areas – education, recreation & community outreach, and elected to dedicate the auction proceeds to the Foundation.