By Newsroom on June 12, 2018Comments Off on IHOP Changes Name to IHOB and Reveals the ‘B’ is for Burgers

IHOP Restaurants announces that it is going by a new name – IHOb .

Since the news broke last week on the brand’s social media sites, fans can’t get enough with more than 30,000 people speculating what the change could “b”, guessing everything from bacon to brunch to bananas. The change in fact celebrates the debut of the brand’s new Ultimate Steakburgers, a line-up of seven mouth-watering, all-natural burgers. 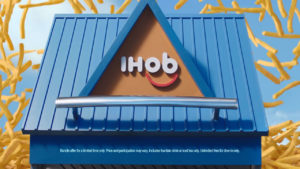 Each Ultimate Steakburger starts with 100% USDA choice, Black Angus ground beef that is smashed on the grill to sear in the juices and flavour before being topped with premium ingredients and sandwiched between a buttered and grilled Brioche bun.

To show the brand is as serious about burgers as it is about its world-famous pancakes, it’s flipped the “p” to a “b” in their iconic name for the time being, including its Twitter handle. A flagship IHOb restaurant in Hollywood, CA, has also been completely re-burgered and will play host to the VIB launch party the evening of June 11.

But even those who aren’t near Los Angeles can get in on burgermania at IHOb — new Ultimate Steakburgers are available nationwide and for a limited time, come with unlimited fries and a drink starting at $6.99 at participating locations. 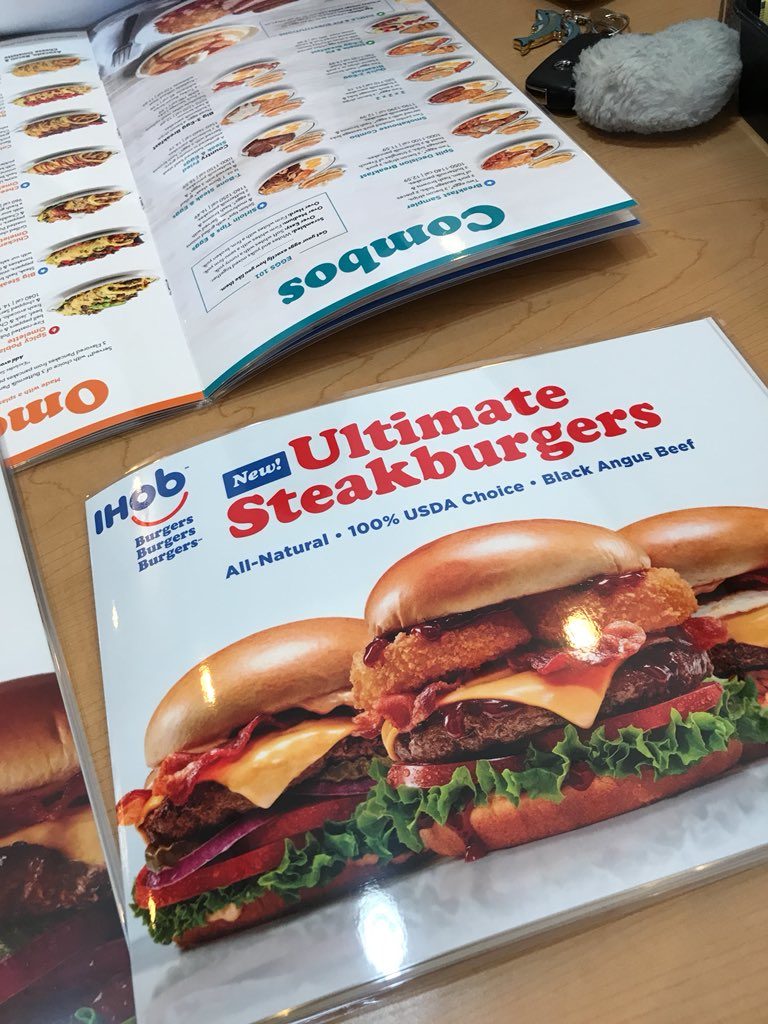 HOb’s Ultimate Steakburgers come in seven varieties that will satisfy burger cravings morning, noon and night. The line-up, which includes both distinctive and classic flavours, is available at IHOb restaurants nationwide starting June 11:

“Burgers are a quintessential, American menu item so it makes perfect sense that IHOP, one of the most iconic, all-American comfort-food brands in the world, would go over the top to create a delicious line-up of quality burgers that hit the spot any time of day,” said Chef Nevielle Panthaky, Head of Culinary at IHOb. 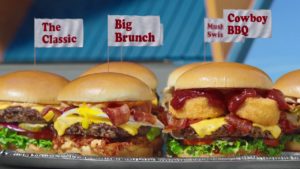 “Our new Ultimate Steakburgers are made with all-natural, 100% USDA Choice, Black Angus ground beef that is smashed on the grill to create a sear that locks in the juices and flavour. With seven different burger builds, all Steakburgers are custom built and piled high with premium quality ingredients and unique, signature sauces in between a buttered and grilled Brioche bun. There’s definitely a juicy Steakburger for whatever you might be craving at any time of day! The IHOP Culinary team took the creation of these Steakburgers as seriously as we take innovation around our pancakes, which means they’re soon to become world famous, too.”

To spread the news about their new burgers and their new name, IHOb is shouting it from the rooftops. Literally. Droga5’s latest creative campaign for the brand puts an overly-excited IHOb manager atop IHOP’s iconic and slightly dangerous blue rooftop. From this precarious position, the manager risks life and limb to spread the word… or should we say, the letter, b. For burgers. The spot will air nationally on TV, online and on social media beginning today, and can be viewed here. 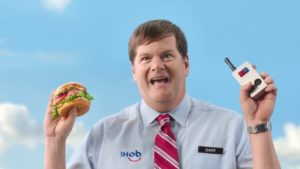 “Everyone knows that IHOP makes world-famous pancakes so we felt like the best way to convince them that we are as serious about our new line of Ultimate Steakburgers as we are about our pancakes, was to change our name to IHOb,” said Brad Haley, Chief Marketing Officer for IHOb restaurants.

“We’ve pancaked pancakes for 60 years now so it’s the perfect time to start burgerin’ burgers, and we’re kicking it off by flipping the ‘p’ in IHOP to a ‘b’ for burgers. And, when you try them, I think you’ll agree with me that IHOb’s new line of Ultimate Steakburgers are so good that I’d put them up against anyone’s … just like our pancakes.”

Guests can visit here to learn more about the new Ultimate Steakburgers, the IHOb flip, and the flagship burger location, and find their nearest restaurant.

IHOP Changes Name to IHOB and Reveals the ‘B’ is for Burgers added by Newsroom on June 12, 2018
View all posts by Newsroom →