By Newsroom on August 27, 2013Comments Off on ILED Media Digitalises Harry Ramsden’s Restaurants 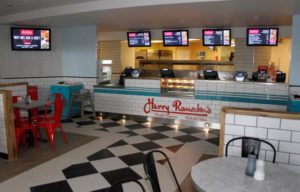 A Harrogate-based digital display specialist has successfully completed a major contract with one of the world’s most iconic fish and chip shop chain.

As part of a £1 million investment in new technology, Harry Ramsden’s appointed ILED Media – who specialise in the full service delivery of digital display solutions – to install LCD digital menu screens at 15 selected restaurants in the UK and Ireland.

The move is part of the group’s investment in state-of-the-art technology for its restaurants, with the new screens replacing more traditional light box systems.

Following a successful six-month pilot at three of Harry Ramsden’s quick-service restaurants, ILED Media was contracted to install five NEC V422 42” HD screens per outlet in an additional 15 properties to display the menus.

The outlets with the new digital screens include Meadowhall, Scarborough, Trafford Centre, Blackpool and Cheshire Oaks.

ILED Media’s UK Sales Manager, Andrew Simister, said: “The Harry Ramsden’s contract is a fantastic business win for ILED Media. While light box technology is still used widely across the hospitality sector, many businesses are now coming around to the idea of digital screens. They give the business more control over what they advertise, promote and offer, where and at what price.”

Joe Teixeira, CEO of Harry Ramsden’s said: “As Harry Ramsden’s continues to move forward in successfully attracting new customers with our extended menu, this ‘cloud based’ digital signage platform affords individual outlets the opportunity to offer the most relevant promotions instantaneously to reflect local tastes, and that can only bring increased benefits to both our customer base and our brand.”

“During the initial 3 month pilot, the positive feedback from customers, coupled with the marked uptake in sales of the various products promoted on live screens, was such that it made sense to equip as many outlets with this technology, as quickly as possible. Whilst we will not be moving away completely from traditional translights just yet, digital technology will clearly play a key role in our future plans,” continued Joe.

Mr Simister added: “I fully expect that we will be seeing more and more of this technology in restaurants in the near future – it’s extremely versatile and its effect is both measurable and, more importantly, proven to be a success.”