By Newsroom on May 2, 2013Comments Off on Introducing Japanese Food Culture in English 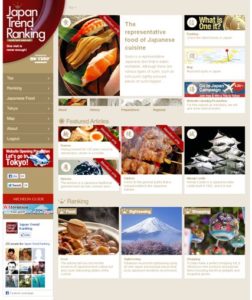 Gurunavi, Inc., operator of Japan’s leading restaurant search site, Gurunavi, announced on May 2 the launch of “Japan Trend Ranking“, an English website created with the goal of increasing the understanding of Japanese food culture while creating Japan enthusiasts overseas.

Japanese cuisine has been enjoying a recent global boom but the country’s food culture is not necessarily correctly understood.

Gurunavi is in an excellent position to improve understanding based on its up-to-date, accurate, and authentic information from more than 500,000 restaurants nationwide, its network of producers in every city and municipality, and its community of about 20,000 chefs.

In improving knowledge about Japanese cuisine and Japanese food culture, Gurunavi can also contribute to the healthy development of Japan’s dining-out culture.

In order to develop repeat visitors to Japan, it is important that detailed local information is available. For the past eight years, Gurunavi has provided detailed information on the Tokyo metropolitan area through its “Let’s Enjoy Tokyo” site, operated in partnership with Tokyo Metro.

In addition, its “Gurutabi” site has been the definitive source of regional information contributed by local people for the past three years. “Japan Trend Ranking” will link with these daily updated sites to provide detailed, accurate, and fresh local information.

Gurunavi has previously launched initiatives focused on inbound tourism under the theme of dining spots popular with foreign visitors.

With the launch of “Japan Trend Ranking” and its concept of “Japan, one visit is never enough,” the project to create Japan enthusiasts overseas is about to get fully under way.

Introducing Japanese Food Culture in English added by Newsroom on May 2, 2013
View all posts by Newsroom →