By Newsroom on May 16, 2013Comments Off on Italian Ice Cream Parlour Runs Local Newspaper Campaign to Defend £13.50 Cone 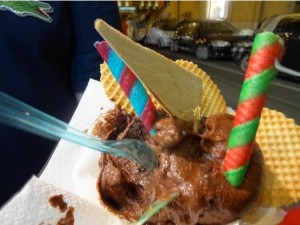 An Italian ice cream parlour which left its patrons cold after billing them £54 for four ice cream cones has defended its prices in a series of national newspaper advertisements.

The Antica Roma gelateria rose to international infamy last month after their eye watering receipt was published around the world but now the vendor is fighting back, protesting that its pricing is justified.

Titled ‘The price is right’ the ad is illustrated with a series of lavish depictions of its wares; including decorative coloured wafers, strawberries and chocolate sauce and incorporated the statement:

“In our gelateria we also sell cones for €2.50 but the tourists from Birmingham preferred to choose another type, which come with a big wafer, have special ingredients and contain 700 grams of gelato.”

Rome’s mayor offered the group a free return trip to Rome later this month by way of recompense – an offer which has been accepted.