Jagermeister And Freddie Roach Launch “A Brother in Your Corner” Competition

By Newsroom on February 26, 2013Comments Off on Jagermeister And Freddie Roach Launch “A Brother in Your Corner” Competition 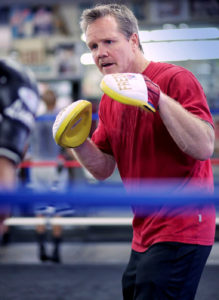 Jagermeister is proud to announce “A Brother in your Corner,” a social responsibility campaign and consumer competition with legendary boxing trainer, Freddie Roach .

Arguably the most noteworthy trainer in boxing today and one of the greatest of all time, Hall of Famer Freddie Roach has trained 31 world champion boxers.

Over the course of his career, Roach has been very outspoken about taking care of his fighters in and out of the ring, advising them when it is time to call a fight or walk away from the round.

Regardless of how unpopular of a decision it may be, Roach puts his brotherhood of boxers first and lives by the same code that Jagermeister follows, The Jager Code. The code of always having “A Brother in your Corner”.

Jagermeister and Freddie Roach challenge consumers to share stories of how they live by the “Jager Code” for a chance to win a once-in-a-lifetime trip to Vegas with 3 friends where they will receive a private training session from Roach himself, boxing tickets, dinner with the boxing great and VIP access to the weekend’s most exclusive party.

A Brother in Your Corner Competition begins February 19th and runs for 8 weeks.

Each week, two entrants will advance to the final round, one based on popular vote and one Jagermeister-chosen wildcard, aptly named for Roach’s gym in Los Angeles.

Those who advance due to popular vote will also receive boxing memorabilia signed by Roach. The grand prize winner of the ultimate weekend in Vegas will be hand-selected by Freddie Roach and announced the week of April 21st. 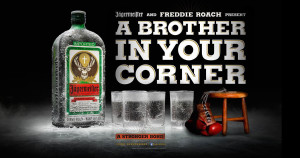 Freddie Roach says,“Jagermeister’s ‘A Brother in Your Corner’ competition challenges everyone to step up and show how strong their bonds are within their brotherhoods. I know these bonds well, as I believe I have lived by this code throughout my entire career in boxing. I have been fortunate to train 31 world champions yet I feel it is not always about the win. It’s about always being in their corner and having their back.”

“Social responsibility is extremely important to the Jagermeister brand and to Sidney Frank Importing Company, Inc. We are proud to partner with Freddie Roach to launch the pioneering ‘A Brother in Your Corner’ program which was developed to promote responsible consumption. We intend to effectively communicate the power of knowing when you’ve had enough and it’s better to sit a round out,” says Amanda Blanco , VP of Marketing for Jagermeister at Sidney Frank Importing Company, Inc.

Must be at least 21 years of age to enter. Open to all United States residents. No purchase necessary.

In May of 2012, Jagermeister unveiled “Stronger Bond,” the brand’s first ever television and 360 degree advertising campaign in the United States.

Aimed at the 21-29 year old male demographic, Jagermeister brought together seven men at the top of their respective crafts to form the ultimate bond.

Freddie Roach was among these men, who not only had to embody the untamed edge of Jagermeister, but also had to be a part of a group whose success relies on their strong bonds with others – one of the foremost social components of the brand.

Jagermeister And Freddie Roach Launch “A Brother in Your Corner” Competition added by Newsroom on February 26, 2013
View all posts by Newsroom →