Kashi’s New, Simpler Packaging Highlights the Farmers Who Produce It

By Newsroom on July 28, 2016Comments Off on Kashi’s New, Simpler Packaging Highlights the Farmers Who Produce It 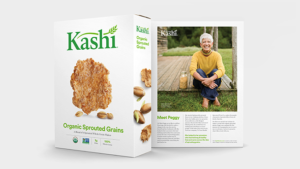 As more consumers gravitate toward organic and seek to know more about where their food comes from, Kashi is rolling out a new brand identity and package design that tells those stories and puts its food front and centre.

“[The cereal] category is very shout-y,” said Tosh Hall, executive creative director at Jones Knowles Ritchie. “Our mission was to simplify the architecture on the box and provide all the information consumers are looking for in a clean way. We simplified the package and shot the product in a straightforward way to show the food in its best light. We got rid of all of the other things on the box that are category generics and highlighted what’s most ownable to Kashi—the food they’re providing and the people who create it.”

The back panels of the new cereal boxes tell stories about Kashi farmers and producers—like Mike, who grows organic sweet potatoes for Kashi cereal in Sims, N.C., or Peggy, owner of To Your Health Sprouted Flour Co., which provides flour for Kashi’s organic sprouted grains cereal. Kashi’s Dark Cocoa Karma cereal features the story of Newton Russell, a Wyoming-based farmer who piloted a program to help farmers switch from conventional farming to organic. 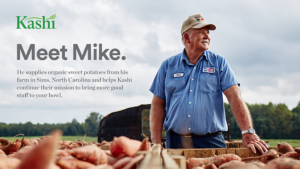 “We wanted to bring consumers closer to the food, and the back-panel stories do that by telling the stories of the people who made the food,” said Jeff Johnson, senior director of marketing and new ventures at Kashi.

It’s the brand’s first redesign in several years and one that should help Kashi stand out in the cereal space, Johnson added.

“The last time we redesigned our identity, a number of our competitors copied it,” he said. “The space became cluttered with a lot of like-looking items. We thought about how we’re a culture of food geeks and how we could bring that to life. It started with food first, so we put that front and center with the new design. Kashi’s very passionate about creating positive change in the food system, and we hope to get that message across and have people embrace it.”

Kashi’s New, Simpler Packaging Highlights the Farmers Who Produce It added by Newsroom on July 28, 2016
View all posts by Newsroom →