By Newsroom on October 11, 2013Comments Off on Kate Upton Dreams About Hot Pockets Brand Sandwiches in Parody Music Video

Supermodel is torn between premium meats and buttery seasoned crusts of new Hot Pockets sandwiches in remake of Biz Markie’s rap classic, “Just a Friend (You Got What I Need)”

Turning up the heat on the new Hot Pockets brand sandwiches, supermodel Kate Upton and entertainment icon Snoop Dogg have teamed up to reveal the music video, “You Got What I Eat.”

A humorous remix of Biz Markie’s 1989 hit single “Just a Friend (You Got What I Need),” the music video highlights the brand’s exciting re-launch and heralds the new and improved Hot Pockets sandwiches which feature premium ingredients like 100% Angus Beef and Hickory Ham, real cheese, and buttery seasoned crusts.

“I love working with the Hot Pockets sandwiches team. They let me do what I do and bring the funk out with their message you know?” stated Snoop. “We needed to top ‘Pocket Like It’s Hot,’ and this video is so dope. It’s funnier and we got the flyest girl in it with me.”

“You Got What I Eat” showcases a battle between #TeamMeat led by “the Butcher” (played by actor Oliver Cooper) and #TeamCrust led by “the Baker” (played by Snoop). The rap battle plays out in Kate’s dreams, which also feature YouTube star Kevin “KevJumba” Wu, the larger-than-life brand mascot Herbie Hot Pockets, as well as some surprise guest cameos by broadcast news legend Larry King and another famous pal of Snoop’s. The music video follows up last year’s viral hit, “Pocket Like It’s Hot,” which remixed Snoop’s top single “Drop It Like It’s Hot” and climbed to #4 on the AdAge viral video chart. 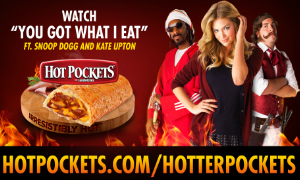