By Newsroom on June 17, 2014Comments Off on Kellogg’s Frosted Flakes “Show Your Stripes” Campaign Celebtates the Play in Playing Sports 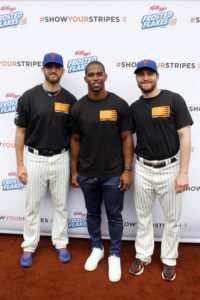 “In an age when sports is increasingly competitive for kids, Frosted Flakes is celebrating the ‘play’ in playing sports,” said Matt Lindsay, Senior Director of All Family Brands for Kellogg’s. “Show Your Stripes is all about keeping sports fun and giving kids the confidence to be themselves when playing their game.”

At the June 11 event, Little League teams from the New York and Pennsylvania area arrived at Citi Field expecting a behind-the-scenes tour of the ballpark. After exploring the Jackie Robinson Rotunda and Mets Hall of Fame and Museum, the young athletes (ages nine to 12) were escorted through a tunnel behind home plate and onto the field.

They were then surprised by the appearance of Cruz, Murphy and Niese, who led the Little Leaguers through three “Show Your Stripes” stations. Murphy and Niese addressed the players about the importance of team spirit – sharing Mets team celebrations, handshakes, rally caps and more.  Little Leaguers had the opportunity to share their own team traditions and teach the pros their rituals. 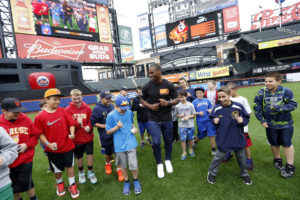 Cruz, known for his signature touchdown celebrations and style on and off the field, spoke about self-expression on the playing field, and learned some new moves from the young players. Each attendee also had the chance to choose his or her walk-up music and share a nickname, be introduced over the ballpark PA and walk to the batters’ box just like the major leaguers.

“I am glad to team up with Kellogg’s Frosted Flakes to talk about the importance of ‘Showing Your Stripes’,” said Cruz. “It’s a good message to share – sports is a great opportunity for kids to show off their personal style and personal skills, while still being a great teammate and not showboating.” 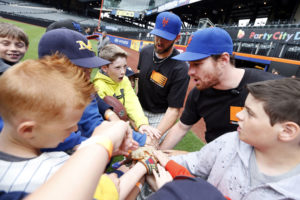 The Show Your Stripes campaign continues through the close of the Little League Baseball World Series in August in South Williamsport, Pennsylvania, where Kellogg’s Frosted Flakes will host more “Show Your Stripes” themed activities.

Kellogg’s Frosted Flakes also sponsors “Show Your Stripes” segments on EA Sports Gamechangers, which showcase young athletes around the country interacting with professional athletes and learning more about the importance of teamwork and self-expression.

Kellogg’s Frosted Flakes “Show Your Stripes” Campaign Celebtates the Play in Playing Sports added by Newsroom on June 17, 2014
View all posts by Newsroom →