By Newsroom on July 27, 2017Comments Off on KFC Makes Limited Edition Game Controller Out of its To-Go Chicken Box

KFC has been on a roll of late—there was its limited edition line of accessories and home goods, followed by its inedible US$20,000 ‘Zinger’ burger that ending up getting sold to vegans. 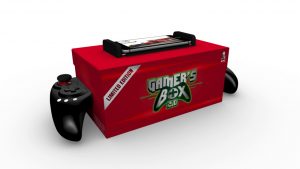 The ‘Game Controller 2.0’ houses your KFC meal, comes with a free can of Mountain Dew, and allows you to play multiple mobile games such as Pac-Man, Temple Run, Retro Racing, Warblade HD, and Rush City.

Simply mount your smartphone to the holder located on the top of the box, before connecting it to the controller using bluetooth. Located on each side of the box is a physical game pad, similar to those found on traditional game controllers. The gadget can be charged using a normal smartphone charger and supports Android 3.2 or iOS 7.0.

A very limited 10 boxes are available. To stand a chance to get your hands on one of the 10, you’ll have to post a comment on the Gamer Box video via KFC India or Mountain Dew India’s social media platforms.

KFC Makes Limited Edition Game Controller Out of its To-Go Chicken Box added by Newsroom on July 27, 2017
View all posts by Newsroom →