By Newsroom on May 8, 2017Comments Off on KFC Release Mother’s Day Romance Novel Starring Colonel Sanders

KFC continues to dip its drumsticks into more facets of popular culture. The brand has dabbled in wrestling, comic books, and now, just in time for Mother’s Day, romance novels. 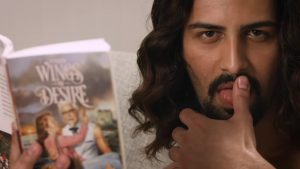 KFC’s “Tender Wings of Desire” is a new bodice-ripper in which Colonel Sanders plays the Fabio role. Created out of Wieden & Kennedy Portland, the novella is set in Victorian England and seems to feature all the conventions of romantic pulp. It tells the story of a defiant heroine, Lady Madeline Parker, who flees her boxed-in life betrothed to a man she doesn’t love in search of something more soul-satisfying. She then encounters and finds herself uncontrollably drawn to Harland, a “handsome sailor with a mysterious past,” and must then decide whether to choose a life of stability or one of passion.

The dedication page reads, “For mothers everywhere, I dedicate this to you–a brief escape from motherhood into the arms of your fantasy Colonel. Whoever he may be.”

He was the most handsome person she had ever seen; even his beard made him look more manly than unkempt.

“I’ve never seen a sailor who wore glasses before,” she said suddenly. He grinned.

“Neither have I. Then again I don’t often look in the mirror,” he replied.

She felt her cheeks blush a flame red, and she retreated to the kitchen to stop them from blushing further.

The 92-pager is available to download for free on Amazon.com. KFC will also be giving 100 fans on social media a free dinner and a hard copy of the book, complete with cheesy cover of a ripped Colonel whose guns pop out of his sleeveless white suit and cradle Lady Parker, who clenches a chicken leg as she looks lovingly at his smiling mug. 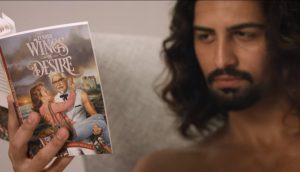 The idea promotes KFC’s $20 Fill Up offer — a family combo of Extra Crispy chicken, cole slaw, biscuits and gravy. So while the family chows down, Mom can soak in a bubble-filled, candle-lit tub and get lost in her Kentucky-Fried fantasy.

“The only thing better than being swept away by the deliciousness of our Extra Crispy Chicken is being swept away by Harland Sanders himself,” said George Felix, director of advertising for KFC US in a statement. “So this Mother’s Day, the bucket of chicken I get for my wife will come with a side of steamy romance novella. Dinner is taken care of and she’ll have the time to escape her busy schedule.” 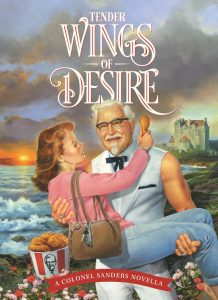