By Newsroom on January 20, 2016Comments Off on Kraft Heinz Returns To Big Game Advertising 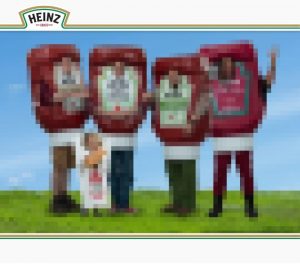 Kraft Heinz are returning to the Super Bowl for the first time since 2014. The company released a blurry teaser picture and statement, without divulging much about its new campaign from David.

“Kraft Heinz is returning to the Big Game with a new, 30-second television commercial for the Heinz brand – and this time, they’re bringing the whole family. Everyone knows and loves the great taste of Heinz Ketchup, and we wanted to introduce the world to the rest of the great tasting family in a campaign called #MeettheKetchups. We have no additional details to share at this time, but look forward to when we can share more with you,” the company said in a brief statement.

Heinz, which acquired Kraft last summer, sells a variety of ketchup including organic ketchup, ketchup blended with Sriracha flavour and ketchup blended with Balsamic vinegar. Last spring, before the companies completed their deal, Heinz featured its mustard in a campaign from David. At that time, an executive said Cramer-Krasselt would remain the agency for Heinz ketchup.