By Newsroom on March 6, 2014Comments Off on Lady Gaga to Headline Doritos #BoldStage at South By Southwest Music Festival 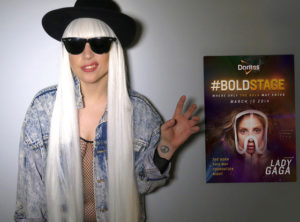 Doritos, one of the marquee brands from PepsiCo‘s Frito-Lay division, announced its return to the South by Southwest (SXSW) Music Conference and Festival in Austin, Texas, with its boldest headlining act to date: Lady Gaga.  With an exclusive performance celebrating the multi-platinum-selling artist’s latest album ARTPOP – which debuted at No.1 on the Billboard 200 – and her Born This Way Foundation, Lady Gaga will headline the Doritos #BoldStage on Thursday, March 13.

Through a special program that gives fans a chance to express their individuality, the only “ticket” to Lady Gaga’s exclusive performance will be an act of boldness.  From now until Wednesday, March 12, the Doritos brand will reveal a series of challenges – known as Bold Missions – that fans must complete for a chance to gain access to the show.  The first Bold Mission – which Lady Gaga announced herself – is called #BoldBravery.  It asks fans to share a picture or video that expresses their individuality through a bold action using the hashtags #BoldBravery and #BoldStage.

“I believe that being an individual is the boldest thing you can do,” said Lady Gaga, whose musical talent and cutting-edge style have led her to five Grammy Awards and 13 MTV Video Music Awards.  Her global artRave: The ARTPOP Ball is one of 2014’s biggest global tours. “I can’t wait to see all creative, generous, brave and individual acts my fans take to gain access to the show.”

Lady Gaga to Headline Doritos #BoldStage at South By Southwest Music Festival added by Newsroom on March 6, 2014
View all posts by Newsroom →