By Newsroom on May 4, 2016Comments Off on Mad Mex Serves up its Big Burrito Challenge in New Promo Campaign

Fresh Mexican grill, Mad Mex is serving up its annual Mad Mex Big Burrito Challenge, calling on brave amigos around the country to def’eat a one kilo burrito in one sitting.

The campaign theme developed by Sarah Hendry, Mad Mex national marketing manager, centres around the tagline ‘Unleash the Beast’. Only those challengers brave enough to “Unleash the Beast” and def’eat the one kilo burrito will be rewarded with an authentic wrestling mask, custom made for Mad Mex in Mexico. Released in stages across the five-week campaign, there will be four different animal themed masks to collect. Kicking off is El Aguila (the Eagle) with the remaining masks kept a surprise until their release date. 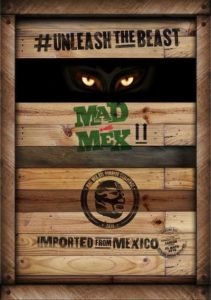 Gaye Steel, head of marketing at Mad Mex, who joined the brand in January, says 2016’s Big Burrito campaign is the biggest yet for the brand.

Steel said: “We’re really excited for this year’s Big Burrito campaign because for the first time, we have solid PR support, a series of national in-store activations and a media partnership to help us amplify this already successful campaign even further. We believe Nova’s drive team is a great match for this particular campaign, especially after we heard that co-host Marty Sheargold is a passionate Mad Mex fan.”

People who want to break the “portion control” rules are being challenged to chow down on a monster Mexican classic. Those looking to take it on need to head into any Mad Mex store across the nation, take down the one kilo burrito then show one of the luchadores the receipt and foil when it has been polished off. Made with the same fresh ingredients as a regular burrito, the big burrito is double the size and double the fun.

The Big Burrito Challenge was created in honour of Cinco de Mayo; the Mexican holiday that commemorates the 1862 battle on the hills of Puebla, where the Mexican army took on an unexpected French assault. Outnumbered two-fold, the steadfast Mexicans fought to reclaim their turf and despite the odds not being in their favour, they came out on top.

Mad Mex Serves up its Big Burrito Challenge in New Promo Campaign added by Newsroom on May 4, 2016
View all posts by Newsroom →